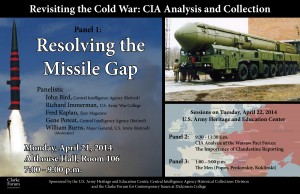 In the 1950s, our nation faced one of the gravest military threats in its history. The Soviet Union had nuclear weapons and boasted they had the means to deliver them. Was the U.S. truly vulnerable to a first strike? Intelligence analysts had few answers and assertions of “Bomber Gaps” and “Missile “Gaps” abounded.  President Eisenhower recognized that aerial reconnaissance of the Soviet Union was the answer. The story of the U-2 and Corona satellites is now history, but the success of those programs and their follow-on versions is the stuff of today’s high-tech intelligence and warfare.

Link to more information on the U.S. Army Heritage and Education Center Site

CIA Analysis of the Warsaw Pact: The Importance of Clandestine Reporting

The job of intelligence is to reduce uncertainty. In the 1950s, our nation faced uncertainty, and one of the gravest military threats in its history. The Soviet Union had an enormous advantage in conventional arms and forces. They also possessed nuclear weapons and boasted they had the means to deliver them. Would the Soviets invade Western Europe? Was the U.S. truly vulnerable to a first strike? Intelligence analysts had few answers and assertions of “Bomber Gaps” and “Missile “Gaps” abounded. Clandestine human sources, the U-2 aircraft and Corona satellites, and the analysis that those collection efforts enabled, gave President Eisenhower and his successors far greater clarity and decision advantage. The efforts are now history, but their success – and those of follow-on programs, is the stuff of today’s high-tech intelligence and warfare. The purpose of this forum is to look back at those early efforts, partly in light of current events, to understand their role in our politics and policies of the last half-century.
The forum is centered on recent publication of two volumes by the CIA’s Historical Collections: Penetrating the Iron Curtain: Resolving the Missile Gap and CIA Analysis of the Warsaw Pact Forces: The Importance of Clandestine Reporting. The authors and editors, John and Joan Bird will present and discuss the publications along with selected historians, authors, and scholars in a series of three panels.

This series is sponsored by the U.S. Army Heritage and Education Center, the Central Intelligence Agency Historical Collection Division, and the Clarke Forum for Contemporary Issues at Dickinson College.

Panel I Participants’ Biographies (provided by the panelists)

Joan Bird, one of the co-authors of this study, had a 29 year career at CIA as a senior analyst of Soviet issues, including Soviet space activities, Soviet policies on space weapons, and arms control of space and defense issues. She is a graduate of West Virginia University and spent three years at the Center for Naval War Studies of Naval War College developing ways to incorporate intelligence, space, communications and information operations in their studies and war games. In addition to 25 years as an analyst, she spent three years as a member of the Defense and Space negotiating team and a year supporting US delegation to the UN Conference on Disarmament on Arms Control for Space. Since retirement in 1997 she has worked with the Naval War College War Games, and for the Army Training and Doctrine Command assessing the information operations play of their Army after Next Series of war games. She is also the co-author of several historical studies for the Historical Collections Division of CIA.

John Bird, one of the authors of this study, had a 32 year career as an analyst of Soviet military issues at CIA. He has a Master of Arts in economics from the University of Washington and is a graduate of the national war college. In Addition to his many assignments within the CIA, he served as a deputy national Intelligence Officer for General Purpose forces, as director of the Strategic Warning Staff and as national intelligence officer of warning. He was chief of the intelligence community’s monitoring authority for all U.S. arms control treaties and agreements. He also served as the intelligence community’s senior intelligence representative to eh conference on disarmament during the negotiations that resulted in the chemical weapons treaty. Since his retirement from CIA in 1994 he has worked with the Naval War College designing and assessing war games, and for the Army Training and Doctrine Command designing and assessing the Army After Next series of war games. In addition he has undertaken projects for the Intelligence Community during the last several years.

Richard H. Immerman is the Edward J. Buthusiem Family Distinguished Faculty Fellow in History at Temple University. He is also holds the Francis W. DeSerio Chair in Theater and Strategic Intelligence Studies at the U.S. Army War College. Dr. Immerman has taught history and political science at the University of Hawaii, Princeton University, University of Colorado, Rutgers University and Boston College. He has authored or co-authored eight books and edited two more. His latest book, The Hidden Hand: A Brief History of the CIA was published this year. Dr. Immerman has also published 39 articles, essays and contributions and numerous book reviews. In 2007, Dr. Immerman was invited by the director of National Intelligence to join his team as the assistant deputy director of national intelligence for Analytic Integrity and Standards, and Analytic Ombudsman and served in that capacity through 2008. He currently chairs the Historical Advisory Committee to the Department of State and holds the Francis W. De Serio Chair in Strategic Intelligence at the Army War College.

Fred Kaplan is the national-security columnist for the online magazine Slate and a senior Schwartz fellow at the New American Foundation. For 20 years, he was a staff reporter for the Boston Globe, writing as the papers military correspondent (1982-91), Moscow bureau chief (1992-95), and New York bureau chief (1995-2002). In 1983, he was a leading member on the team that wrote the Globe’s Pulitzer Prize-winning Sunday magazine on the nuclear arms race.

Kaplan is the author of the prize winning book about the history of nuclear strategy, The Wizards of Armageddon (Simon & Schuster, 1983; reprinted by Stanford University Press 1991). Daydream believers: How a Few Grand Ideas Wrecked American Power (Wiley & Sons, 2008), and 1959: The Year Everything Changed (Wiley & Sons, 2009).

From 1978-80, Kaplan worked as the national-security adviser to the Representative Les Aspin in the U.S. House of Representatives. He graduated from Oberlin College and has a Ph.D. in political science from the Massachusetts Institute of Technology.

Gene Poteat is a retired CIA senior scientific intelligence officer. Educated as an electrical engineer and physicist, he holds master’s degrees in national security and intelligence studies from the Institute of World Politics, a graduate school in Washington, DC, where he also received an honorary doctorate. At that institution he lectures on technology, intelligence, and national security. He began his career with Bell Telephone Laboratories in New Jersey and Cape Canaveral, Florida, as a missile guidance development engineer. His CIA career followed and included work on the U-2, A-12 Oxcart, and various space and naval systems. His CIA assignments included the directorate of science and technology, the National Reconnaissance Office, technical director of the Navy’s Special Programs Office, and executive director of the Intelligence Research and Development Council. He served abroad in London, Scandinavia, and the Middle East. Since 1999 he serves as president of the 5,000-member Association of Former Intelligence Officers (www.afio.com) located in Falls Church, Virginia, where he frequently addresses media inquiries, counsels students considering intelligence careers, and writes on late-breaking intelligence issues for AFIO  publications, and for many other U.S. and foreign publications.

During his military career, General Burns commanded several nuclear delivery field artillery units in Germany in the mid-1970’s. As a general officer, he served as the Joint Chiefs of Staff representative to the Intermediate Range Nuclear Forces negotiations in Geneva from 1981 to 1984, and 1985 to 1986.  In 1986, he was seconded to Department of State as principal deputy assistant secretary of State for Political-Military Affairs and military assistant to The Secretary of State.

Video of the Panel Discussion on Resolving the Missile Gap