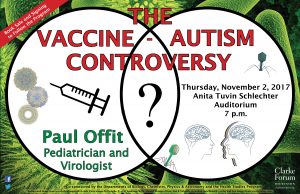 Pediatrician and Expert on Vaccines, Immunology and Virology

How have scientists, the media, and the public dealt with the question of whether vaccines cause autism? A book sale and signing will follow the presentation.

The event is sponsored by the Clarke Forum for Contemporary Issues and co-sponsored by the Departments of Biology, Chemistry, Physics & Astronomy and the Health Studies Program.

Offit was a member of the Advisory Committee on Immunization Practices to the Centers for Disease Control and Prevention and is a founding advisory board member of the Autism Science Foundation and the Foundation for Vaccine Research. He is also the author of six medical narratives: The Cutter Incident: How America’s First Polio Vaccine Led to Today’s Growing Vaccine Crisis (Yale University Press, 2005), Vaccinated: One Man’s Quest to Defeat the World’s Deadliest Diseases (HarperCollins, 2007), for which he won an award from the American Medical Writers Association, Autism’s False Prophets: Bad Science, Risky Medicine, and the Search for a Cure (Columbia University Press, 2008), Deadly Choices: How the Anti-Vaccine Movement Threatens Us All (Basic Books, 2011), which was selected by Kirkus Reviews and Booklist as one of the best non-fiction books of the year, Do You Believe in Magic?: The Sense and Nonsense of Alternative Medicine (HarperCollins, 2013), which won the Robert P. Balles Prize in Critical Thinking from the Center for Skeptical Inquiry and was selected by National Public Radio as one of the best books of 2013, and Bad Faith: When Religious Belief Undermines Modern Medicine (Basic Books, 2015), selected by the New York Times Book Review as an “Editor’s Choice” book in April 2015. Offit has also written Pandora’s Lab: Seven Stories of Science Gone Wrong (National Geographic Press/Random House, April 2017) and The Hitchhiker’s Guide to Science and Health (manuscript in preparation). In 2017, he also became a weekly columnist for The Daily Beast.