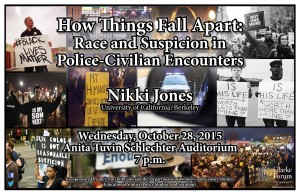 How Things Fall Apart: Race and Suspicion in Police-Civilian Encounters

Drawing on years of field research among Black residents in urban neighborhoods, interviews with police, and videorecordings of police-civilian encounters, sociologist Nikki Jones illustrates how race, suspicion and bias shape the earliest moments of such encounters. She will also share findings from her research which reveals key interactional adjustments that could be used to improve the quality of police encounters with the public. 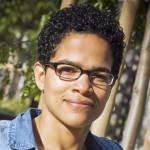 Nikki Jones is an associate professor in the Department of African American Studies at the University of California, Berkeley. She is also a faculty affiliate with the Center for the Study of Law and Society. Her areas of expertise include urban ethnography, race and ethnic relations and criminology and criminal justice, with a special emphasis on the intersection of race, gender, and justice. Professor Jones has published three books, including the sole-authored Between Good and Ghetto: African American Girls and Inner City Violence (2010), published in the Rutgers University Press Series in Childhood Studies (betweengoodandghetto.com). Her research appears in peer-reviewed journals in sociology, gender studies, and criminology. Jones’ next book, based on several years of field research in a San Francisco neighborhood, examines how African American men with criminal histories change their lives, and their place in the neighborhood once they do. Her current research draws on the systematic analysis of video records that document routine encounters between police and civilians, including young Black men’s frequent encounters with the police. Professor Jones is the past-Chair of the American Sociological Association’s Race, Gender and Class Section (2012-13). She also serves on the editorial boards of the Contexts and Feminist Criminology. Jones has received awards for her research and publications including the William T. Grant Award for Early Career Scholars (2007-12) and the New Scholar Award from the American Society of Criminology’s Division on Women and Crime (2010) and Division on People of Color and Crime (2009). Before joining the faculty at Cal Professor Jones was on faculty in the Department of Sociology at UC-Santa Barbara (from 2004-2013). She earned her Ph.D. in Sociology and Criminology from the University of Pennsylvania.