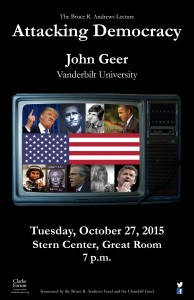 The event is sponsored by the Clarke Forum for Contemporary Issues, the Bruce R. Andrews Fund and the Churchill Fund. It is also part of the Clarke Forum’s Leadership in an Age of Uncertainty Series. 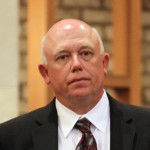 y, interim dean of the Graduate School, and the Gertrude Conaway Vanderbilt Professor of Political Science.  He earned his Ph.D. in 1986 from Princeton University.  Geer is past editor of The Journal of Politics. Geer has published widely on campaigns, elections, and public opinion.  He is author of In Defense of Negativity: Attack Ads in Presidential Campaigns, which won Harvard University’s Goldsmith Prize in 2008.  Geer has recently published the third edition of Gateways to Democracy (2015).  He has provided extensive commentary in the news media about American politics, including live nationwide interviews for FOX, CNN, NBC, CBS, MSNBC, ABC, and NPR.  Geer has also written numerous op-ed pieces for Politico, The Washington Post, LA Times, USA Today, and Chicago Tribune.  His lecturing has earned him a number of awards at Vanderbilt, including the “Squirrel Award,” the 2004 Birkby Prize, the 2005 Jeffrey Nordhaus Award for Excellence in Undergraduate Teaching, the 2009 the Ellen Gregg Ingalls Award for Excellence in Classroom Teaching, and the 2014 Vanderbilt Alumni Education Award.  He is also co-director of the Vanderbilt Poll.

The Bruce R. Andrews Lecture
Until he passed away on January 8, 2005 Bruce R. Andrews was Robert Blaine Weaver Professor Emeritus of Political Science. Bruce taught at Dickinson from 1960 until his retirement in 1992. Recipient of The John J. Curley and Ann Conser Curley Faculty Chair in 2003, Bruce was one of the college’s most distinguished and influential professors in the last 50 years. Bruce was loved and respected by students, colleagues on the faculty and staff, and many friends he and his wife Margery and children Stephen, Mary-Margaret and Carolyn had and have in the Carlisle community. His warm and engaging personality, deep knowledge of American politics, commitment to the liberal arts and active role as a citizen brightened and informed everything he did at Dickinson. As a living memorial to the example Professor Andrews set as a teacher, mentor and friend, those who knew him have endowed the Bruce R. Andrews Fund to continue the kind of vibrant discussion of politics and public life to which Bruce devoted his life.