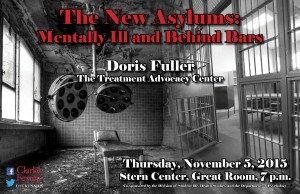 The New Asylums: Mentally Ill and Behind Bars

In the 1930s, barely one in 100 jail inmates had a serious mental illness. Today, the most conservative estimates are one in five jail inmates and even more of the prison population. With video, personal story and professional insight, Fuller will discuss the role of mental illness in turning the U.S. into the world leader in incarceration and discuss practical measures to curb this trend.

Doris A. Fuller is chief of research and public affairs, where she conducts and directs the Treatment Advocacy Center’s original studies abd research-driven communications, including public education related to mental illness.

Fuller has co-authored several recent studies from the Treatment Advocacy Center, including:

She also co-directed the organization’s documentary short, “Mental Illness on Trial” and other video productions.

A frequent guest on national TV and radio, often quoted in print and author of many timely op-eds, Fuller is an author of books, former award-winning journalist and mother of a daughter who experienced a first psychotic break as a college student. Doris described her daughter’s struggles with severe mental illness and March 2015 suicide in a feature for the Washington Post, “How the ‘Demons’ Took My Daughter,” which has been read by millions of readers worldwide.

Doris joined the Treatment Advocacy Center in 2010 as director of communications and subsequently served as executive director for three years before being named to found and build the organization’s new Office of Research and Public Affairs.