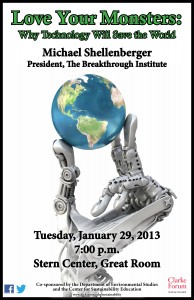 Love Your Monsters: Why Technology Will Save the World

Environmental expert Michael Shellenberger will describe why technology is the key to dealing with the world’s toughest environmental problems from climate change to rainforest destruction and species extinction.

The event is sponsored by The Clarke Forum for Contemporary Issues and co-sponsored by the Center for Sustainability Education and the Department of Environmental Studies.  It is also part of The Clarke Forum’s Leadership in an Age of Uncertainty Series and the faculty seminar series titled, Living in a World of Limits.

Michael Shellenberger and Ted Nordhaus are leading global thinkers on energy, climate, security, human development, and politics. Their 2007 book Break Through was called “prescient” by Time and “the most important thing to happen to environmentalism since Silent Spring” by Wired. Their 2004 essay, “The Death of Environmentalism,” was featured on the front page of the Sunday New York Times, sparked a national debate, and inspired a generation of young environmentalists. They also 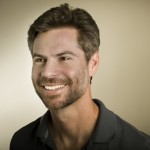 co-authored the 2011 book titled “Love Your Monsters: Postenvironmentalism and the Anthropocene.”

Over the years, the two have been profiled in The New York Times, Wired, the National Review, The New Republic, and on NPR. In 2007, they received the Green Book Award and Time magazine’s 2008 “Heroes of the Environment” award.

In 2011, Nordhaus and Shellenberger started the Breakthrough Journal, which The New Republic called “among the most complete answers” to the question of how to modernize liberal thought, and the National Review called “The most promising effort at self-criticism by our liberal cousins in a long time.”

Shellenberger and Nordhaus are leaders of a paradigm shift in climate and energy policy. They proposed “making clean energy cheap” in The Harvard Law and Policy Review, explained why the Kyoto climate treaty failed in Democracy Journal, and predicted the bursting of the green bubble in The New Republic and Los Angeles Times. The two predicted the failure of cap and trade in the American Prospect, criticized “green jobs” in The New Republic, and pointed a way forward for climate policy in the Wall Street Journal.

Michael Shellenberger is a graduate of Earlham College and holds a master’s degree in cultural anthropology from the University of California, Santa Cruz. He lives in the Bay Area and travels widely.