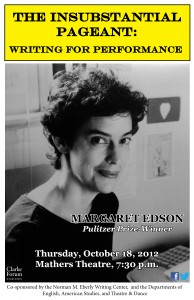 The Insubstantial Pageant: Writing for Performance

We are born ready to talk and listen, but it takes years to learn to read and write. What is gained and lost when the redolent swirl of human experience is consigned to the abstract, linear, preterite alphabetic code? And what ironies await when the freeze-dried code is reconstituted as live performance?

This event is sponsored by the Clarke Forum for Contemporary Issues and co-sponsored by the Norman M. Eberly Writing Center and the Departments of English, American Studies and Theatre & Dance.

Biography (provided by the speaker)
Margaret Edson was born in Washington, DC in 1961.  Between earning degrees in history and literature, she worked on the cancer and AIDS inpatient unit of a major research hospital.  Wit was written in 1991, widely rejected, first produced in 1995, and awarded the Pulitzer Prize for Drama in 1999.  The HBO production won the Emmy Award for Best Film in 2001.  Wit  has received hundreds of productions in dozens of languages and was presented on Broadway in 2012.  The script is used in classes ranging from AP English to medical ethics.

Ms. Edson has been a classroom teacher for twenty years.  She currently teaches sixth-grade social studies.  She lives in Atlanta with her partner, art historian Linda Merrill, and their two sons.