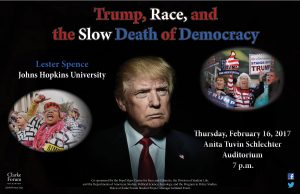 Trump, Race, and the Slow Death of Democracy

Spence will talk about the causes and the potentially stark consequences of Donald Trump’s election. While some point solely to racial politics, Spence examines the role of the neoliberal turn. 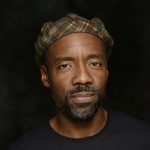 Lester Spence is an associate professor of political science and Africana studies at Johns Hopkins University and the Center for Emerging Media Scholar in Residence. Spence  specializes in the study of black, racial, and urban politics. Over the past decade Spence published articles on American institutional legitimacy in the wake of the contentious 2000 Presidential election, the effects of long-term black political empowerment on black participation, the role of media narratives on black attitudes about HIV/AIDS, and the determinants of support for black nationalism. But with his first and second books (2011 W.E.B. DuBois Distinguished Book Award Winner Stare in the Darkness: The Limits of Hip-hop and Black Politics and Knocking the Hustle: Against the Neoliberal Turn in Black Politics) he’s become particularly interested in studying the causes and consequences of growing inequality within black communities.

In the classroom Spence strives to accomplish three goals: To infuse a love of learning and the life of the mind; to clarify the role politics plays in the world; and finally, to increase the capacity to change it. In 2009 he received an Excellence in Teaching Award from Johns Hopkins University. In 2010 he received an Arts Innovation Grant to fund a course that combined Black Politics and Documentary Photography. In 2016 as a Center of Social Concern Engaged Scholar Spence taught two “deep dive” courses designed to get students to understand the political circumstances leading up to the Baltimore Uprising.
Curriculum Vitae
Subscribe to Spence’s Newsletter