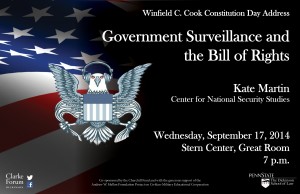 ance and the Bill of Rights

A former senior counter-terrorism official has said that existing surveillance capabilities are creating “the potential for a police state.” This lecture will address whether and how such capabilities can be reconciled with the Constitution’s prohibition against unreasonable searches and seizures, its protections for freedom of speech and religion, as well as the demands of an open government in a democracy.

Kate Martin serves as director of the Center for National Security Studies, in Washington, D.C., the only think tank and advocacy organization devoted exclusively to preserving civil liberties in the national security context. Martin has served as director since 1992, having joined the Center as director of its Litigation Project in 1988 after 10 years as a lawyer in private practice.

Martin testifies frequently before Congress. She regularly provides expert commentary in the media, appearing, for example, on The PBS News Hour and in-depth discussion shows on National Public Radio. She is regularly quoted in the print media, including The New York Times and the Washington Post. She has also has written extensively on these issues for more than twenty years.

Martin and the Center were awarded the 2005 Eugene S. Pulliam First Amendment Award by the Society for Professional Journalists for “years of working to protect open government and freedoms of speech and the press in the face of adversity in the name of national security.” She was inducted into the Freedom of Information Hall of Fame in 2001.

Martin’s court victories include obtaining an emergency order in 1989 on behalf of the National Security Archive that prevented the destruction of the Reagan White House e-mail messages and forcing the historic release of the intelligence budgets for 1997 and 1998 on behalf of the Federation of American Scientists.   After the attacks of September 11, she led the coalition challenge to the Justice Department’s extraordinary policy of arresting hundreds of people in secret and then deporting them after secret immigration hearings.

From 1993 to 2002, Martin worked in emerging democracies, with NGOs in Eastern Europe and Latin America to secure freedom of information and assist in establishing oversight and accountability of secret intelligence agencies. She was co-director with the Helsinki Foundation for Human Rights in Warsaw of such a reform project in 12 former communist countries in Europe.