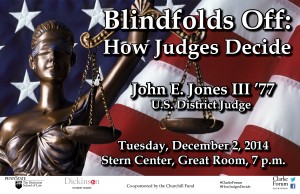 U.S. Judge for the Middle District of Pennsylvania

Blindfolds Off: How Judges Decide

A conversation with Judge Jones, U.S. District judge for the Middle District of Pennsylvania and a Dickinson trustee, about the nature of judging and the role that judges play in American political, social, cultural, and economic life.  Gary Gildin, interim dean and professor of law, The Dickinson School of Law of Penn State University, and Harry Pohlman, professor of political science, Dickinson College, will participate in the discussion. 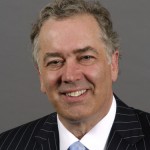 Judge John E. Jones III commenced his service as a United States District Judge on August 2, 2002. He is the 21st judge to sit in the Middle District of Pennsylvania. Judge Jones was appointed to his current position by President George W. Bush in February 2002, and was unanimously confirmed by the United States Senate on July 30, 2002.

Judge Jones was born and raised in Schuylkill County, Pennsylvania. He is a graduate of the Mercersburg Academy, Dickinson College, and The Dickinson School of Law of The Pennsylvania State University.

In 1980 Judge Jones began his legal career as a law clerk to the President Judge of Schuylkill County, the Honorable Guy A. Bowe. Subsequently, he engaged in the private practice of law in Pottsville, Pennsylvania until the time of his elevation to the federal bench.

In November, 1994, Pennsylvania Governor-elect Tom Ridge named Judge Jones as a co-chair of his transition team. Subsequently, in May 1995 Governor Ridge nominated Judge Jones to serve as Chairman of the Pennsylvania Liquor Control  Board.

In 2006 Judge Jones received the Outstanding Alumni Award from the Dickinson School of Law, as well as an honorary doctorate in law and public policy from Dickinson College, where he was recognized as one of the twenty five most influential graduates in the College’s over two hundred and twenty year history. In 2009, the College’s faculty voted to induct Judge Jones into its Phi Beta Kappa chapter. In 2007 he received an honorary doctorate in law from Muhlenberg College. In May, 2006 Judge Jones was named by Time Magazine as one of its Time 100, the one hundred most influential people in the world. Judge Jones has also received a Rave Award for Policy from Wired Magazine. In 2006 Judge Jones was the recipient of the first John Marshall Judicial Independence Award, given by the Pennsylvania Bar Association. In 2009 Judge Jones was the recipient of the Geological Society of America’s 2009 President’s Medal, and in the same year was inducted into the George Washington Spirit Society.

Judge Jones has presided over several noteworthy and high profile cases. In 2003 Judge Jones struck down portions of Shippensburg University’s speech code on the basis that they violated the First Amendment’s free speech guarantee. In that same year Judge Jones ruled, in a decision later affirmed by the United States Supreme Court, that the U.S. Department of Agriculture’s statute assessing milk producers in order to fund advertising, including the Milk Mustache/got milk® campaign did not infringe the free speech rights of the producers. In 2005 Judge Jones presided over the landmark case of Kitzmiller v. Dover School District, after which he held that it was unconstitutional to teach intelligent design within a public school science curriculum. In 2006 he ruled that the Commonwealth of Pennsylvania’s ballot access procedures for minor political parties did not violate the Constitution. In 2014 Judge Jones resolved the matter of Whitewood v. Wolf by striking down as unconstitutional Pennsylvania’s ban on same-sex marriage.

In 2007 Judge Jones and the Kitzmiller case were featured in the two-hour Nova special “Judgment Day: Intelligent Design on Trial,” televised nationally by PBS. In April 2008 “Judgment Day” won a Peabody Award, which is the oldest and most distinguished honor in electronic media. Judge Jones has also appeared as a guest on national television shows and networks such as Today on NBC, the NewsHour on PBS, C-SPAN’s America & The Courts, CNN, and locally on the Pennsylvania Cable Network.

Judge Jones resides in Pottsville, Pennsylvania. He has been married to his wife Beth Ann since 1982. They are the proud parents of daughter Meghan and son John, and delighted grandparents of Carys Bryn Prock.