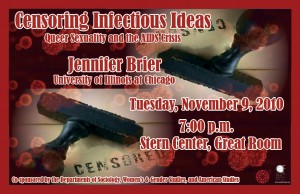 Associate Professor of Gender and Women’s Studies/History, University of Illinois-Chicago

Beginning with her own experiences as an author whose work has been censored, Brier will discuss how the response to AIDS has been affected by attempts to remove discussions of sex and sexuality from its center and question the extent to which we have become a more sexually liberated culture since the 1980s.

This event is co-sponsored by the Departments of Sociology, American Studies and Women’s and Gender Studies.

Background Information (provided by speaker)
In the last stages of preparing her book for publication, including securing the permissions to publish several reproductions of early AIDS prevention posters from San Francisco, Brier’s press informed her that she would not be able to include any images that displayed full-frontal male nudity. Told that the images were not central to her argument and that they would be distracting, Brier had no choice but to exchange the images for less-explicit ones, a decision that uncannily mirrored what happened when the San Francisco AIDS Foundation first created and tried to distribute the posters using federal funds in the late 1980s. In “Censoring Infectious Ideas” Brier will discuss how the response to AIDS has been affected by attempts to remove discussions of sex and sexuality from its center and question the extent to which we have become a more sexually liberated culture since the 1980s. 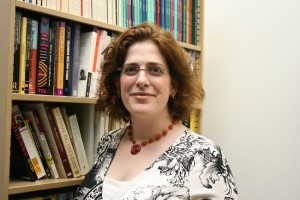 Jennifer Brier holds a joint appointment in the Program in Gender and Women’s Studies and the History Department at the University of Illinois at Chicago. She is the author of Infectious Ideas: U.S. Political Response to the AIDS Crisis, which was published by the University of North Carolina Press in 2009. In it she argues that AIDS provides the perfect lens through which to see the complex social and political history of the 1980s and 1990s. She details how activists, service providers, philanthropists and the federal government responded to AIDS in the first two decades of the AIDS epidemic and places the history of a successful yet complex and contentious social movement organized to deal with the AIDS epidemic in conversation with a more traditional political history of how the state dealt with this public health crisis.

Brier is currently the co-curator of an exhibition on Chicago’s LGBT history set to open at the Chicago History Museum in May 2011. The exhibition, tentatively titled Out Chicago, will be one of the largest shows exclusively dedicated to LGBT history ever to run in a public history institution.