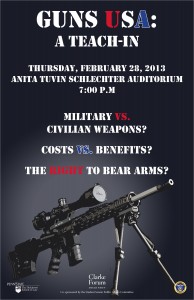 The purpose of this teach-in, which is sponsored by Penn State University Dickinson School of Law, U.S. Army War College and the Clarke Forum for Contemporary Issues on behalf of Dickinson College, is to elevate and broaden the ongoing national discussion about gun safety and gun violence in the United States for the benefit of the faculty, students, and members of the local Carlisle community.  It will focus in particular upon the three following questions: 1) What is the difference, if any, between military weapons and civilian weapons? 2) What are the current limits on the right to bear arms? 3) What are the costs/benefits associated with guns?

The event is co-sponsored by the Student Senate Public Affairs Committee.

Thomas Place is a professor of law at Penn State University Dickinson School of Law where he teaches courses on criminal procedure, constitutional law, post-conviction remedies, and prisoners rights..  He joined Penn State Law after co-founding the first legal services program in Appalachia. He is the author of the Pennsylvania Post Conviction Relief Act — Practice and Procedure.

Colonel David Dworak is on the faculty of the U.S. Army War College in the Department of Military Strategy, Planning, and Operations where he teaches classes on strategy development, joint operations planning, and logistics.  He has been in the Army for 29 years and is intimately familiar with all types of arms and munitions.  Additionally, Colonel Dworak is a certified firearms instructor.

Harry Pohlman is the executive director of the Clarke Forum for Contemporary Issues, a professor of political science and holds the A. Lee Fritschler Chair in Public Policy at Dickinson College.  Pohlman’s teaching interests include American constitutional law, other law-related courses, and political and legal philosophy.

William Nelligan ’14 (moderator) is vice president of Student Senate and chair of the Senate’s Public Affairs Committee. He is a double-major in political science and history, focusing on legal history and the American Civil Rights Movement.  Nelligan is also the first recipient of Dickinson’s Public Service Fellowship.