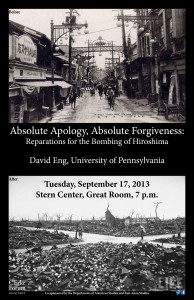 Eng will address how the atomic bombing of Japan and the postwar politics of reparations are both connected to a longer history of native dispossession in the New World, uranium mining of indigenous lands, and more recent colonial violence and militarism in the Cold War transpacific.

Biography (provided by the speaker)
David L. Eng is Richard L. Fisher Professor of English at the University of Pennsylvania, where he is also a member in the Program in Comparative Literature and Literary Theory as well as the Program in Asian American Studies. After receiving his B.A. in English from Columbia University and his Ph.D. in comparative literature from the University of California at Berkeley, Eng taught at Columbia and Rutgers before joining Penn in 2007. His areas of specialization include American literature, Asian diaspora, psychoanalysis, critical race theory, queer studies, and visual culture. Eng has held visiting professorships at the University of Bergen (Norway), Harvard University, and the University of Hong Kong. He is author of The Feeling of Kinship: Queer Liberalism and the Racialization of Intimacy (Duke, 2010) and Racial Castration: Managing Masculinity in Asian America (Duke, 2001). He is co-editor with David Kazanjian of Loss: The Politics of Mourning (California, 2003) and with Alice Y. Hom of Q & A: Queer in Asian America (Temple, 1998). In addition, he is co-editor of two special issues of the journal Social Text: with Teemu Ruskola and Shuang Shen, “China and the Human” (2011/2012), and with Judith Halberstam and José Muñoz, “What’s Queer about Queer Studies Now?” (2005). In 2012-2013, he was a Member of the School of Social Science at the Institute for Advanced Study (Princeton, NJ) as well as an affiliate in the Program in Law and Public Affairs at Princeton University.