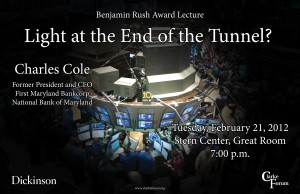 Former President and CEO, First Maryland Bankcorp and The National Bank of Maryland

Light at the End of the Tunnel?

Cole will analyze and discuss the state of the U.S. economy from a global perspective, with a special focus on both the strengths and weaknesses of current financial markets, including how they might affect future job opportunities of college graduates. Cole will also have some suggestions regarding the shaping of an investment portfolio.

This program is part of the The Clarke Forum’s Leadership in an Age of Uncertainty Series.

Biography (provided by the speaker)
Charles W. Cole Jr., is a retired Baltimore Banker and Community leader. He was born in Baltimore, son of a lawyer.  Cole is a graduate of Gilman School and Washington and Lee University with a degree in economics and earned his LL.B. from the University of Maryland School of Law.

Mr. Cole was chosen by then-Governor Harry R. Hughes to represent the financial community on the Governor’s initial trade mission to the People’s Republic of China. That visit resulted in the establishment of the first correspondent banking relationship between a Chinese bank and a bank in this region. In 1982, Mr. Cole served as Vice Chairman of the United Way of Central Maryland Campaign. Mr. Cole was awarded the Henry A. Rosenberg, Sr. Distinguished Citizen’s Award, Baltimore Area Council, Boy Scouts of America in December, 1992.

Mr. Cole, his wife, two daughters and five grandchildren have hiked Tuckerman’s Ravine on Mt Washington in New Hampshire many times and have done extensive trekking in Switzerland for many years.

The Benjamin Rush Award
The Benjamin Rush Award for Humanistic Values in Corporate and Government Life, established in 1985, is one of the most prestigious annual awards presented at Dickinson College. The Award celebrates the achievements of officials and executives who have reached the highest levels in government service or the corporate world. It is named in honor of Benjamin Rush, the prominent colonial Philadelphia physician who was a signer of the Declaration of Independence and founder of Dickinson.

The Award is conferred at a public ceremony on the Dickinson campus, during which the recipient presents the annual Rush Award Lecture. The lectureship guidelines stipulate that the recipient should comment on issues of significance to government or the corporate world, with some attention to the value of the liberal arts in preparing individuals for responsible citizenship. The recipient of the Award is presented with an honorarium and a bronze medal bearing Rush’s likeness. Prior to the Rush Lecture the college hosts a reception and dinner in honor of the recipient.