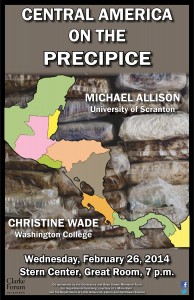 The two panelists will discuss current developments in Guatemala, Nicaragua, Honduras, and El Salvador as well as the general impact of Central America’s role as the key transshipment point for cocaine headed to the United States.

This event is sponsored by the Clarke Forum for Contemporary Issues and co-sponsored by the Constance and Rose Ganoe Memorial Fund for Inspirational Teaching, courtesy of Professor J. Mark Ruhl, and also the Department of Latin American, Latino and Caribbean Studies.

Michael Allison is an associate professor of political science at the University of Scranton. He also directs the University’s Education for Justice program and is a faculty member in the Latin American Studies program. He graduated with a BA (1996) in politics and minors in Latin American and Caribbean studies and peace justice studies from Fairfield University in Connecticut. He received his master’s (2001) and Ph.D. (2006) in political science from Florida State University in Tallahassee, Florida.

His teaching and research interests concern the comparative study of civil war and civil war resolution, particularly as it relates to the transition of rebel groups to political parties. His published work has appeared in Latin American Politics and Society, Studies in Comparative International Development, Conflict Management and Peace Science, and The Latin Americanist.

He was a student Fulbright Scholar to El Salvador and recently returned from a Faculty Fulbright to Guatemala where he researched the Guatemalan National Revolutionary Unit and its transition to political party as well as United States – Central American relations in the post-Cold War period. He maintains a blog on Central American politics and contributes opinion pieces to Al Jazeera English, Latin News, and the Inter-American Dialogue’s Daily Latin America Advisor.

Christine Wade is an associate professor of political science and international studies and the curator of the Goldstein Program in Public Affairs at Washington College, where she teaches classes on Latin American politics, US-Latin American relations, theories of peace and conflict, comparative peace processes, human rights and social justice, revolutionary movements, and other topics. Dr. Wade is the co-author of Understanding Central America: Global Forces, Rebellion and Change (Westview Press, 2014) – now in its 6th edition- and Nicaragua: Living in the Shadow of the Eagle (Westview Press, 2011). Her co-authored book A Revolução Salvadorenha (The Salvadoran Revolution) is as part of the Revolutions of the Twentieth Century Collection at São Paulo: Fundação Editora Da UNESP (2006). She is also the author of publications on the FMLN, peacebuilding and post-war politics in El Salvador, and Central American politics. Dr. Wade is currently completing a manuscript on the politics of peacebuilding in El Salvador, entitled Captured Peace.