Jesus and the Historian 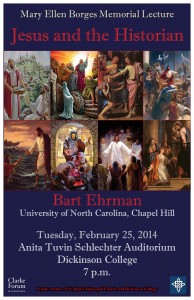 Biblical scholars have long recognized the discrepancies between the four New Testament Gospels and the difficulties that result in determining who Jesus really was.  Can these four Gospels be relied upon to give us an accurate account of Jesus’s words and deeds?

This event is sponsored by St. John’s Episcopal Church on the Square and the Clarke Forum for Contemporary Issues.

Bart D. Ehrman is the James A. Gray Distinguished Professor at the University of North Carolina at Chapel Hill. He came to UNC in 1988, after four years of teaching at Rutgers University. He served as chair of the UNC Department of Religious Studies from 2000-2006.

Professor Ehrman has served as president of the Southeast Region of the Society of Biblical literature and chair of the New Testament textual criticism section of the Society.  Among his editorial positions, he has served as associate editor for the Journal of Early Christian Studies, book review editor of the Journal of Biblical Literature, and editor of the monograph series The New Testament in the Greek Fathers (Scholars Press). He currently serves as co-editor of the series New Testament Tools, Studies, and Documents (E. J. Brill), co-editor-in-chief for the international journal of early Christian studies, Vigiliae Christianae, and area editor (early Christianity) for the Encyclopedia of Ancient History.

Professor Ehrman has been the recipient of numerous academic awards, grants, and fellowships, including the UNC Undergraduate Student Teaching Award (1993), the Phillip and Ruth Hettleman Prize for Artistic and Scholarly Achievement (1994), the Bowman and Gordon Gray Award for excellence in teaching (1998-2001), the Pope Spirit of Inquiry Teaching Award (2008), and the Religious Liberty Award from the American Humanist Association (2011).