Do-gooder intentions go disastrously wrong when Hollywood gives a young Iraqi film student the chance of a lifetime. Operation Filmmaker tells the fascinating and riveting story of this student’s odyssey in the West, which has uncanny parallels to America’s recent misadventures abroad.

Topical Background
Many Americans expected Operation Iraqi Freedom to be a quick intervention welcomed by the Iraqi people. Yet, over six years later, an American occupation continues. Hundreds of thousands of Iraqis and over 5,000 Americans have perished in the conflict since 2003. Millions have become refugees and sectarian violence persists. Our initial expectations were upset; our ignorance of Middle Eastern culture exposed.

Inspired by the 2003 MTV profile of Iraqi film student Muthana Mohmed, American actor Liev Schreiber invited the young man to intern on a Hollywood movie set. Documentary maker Nina Davenport immediately saw an opportunity: she would tape Muthana’s Hollywood internship. “I thought the film would be called The Kindness of Liev Schreiber,” she later said. However, cultural differences Read more

Professor of English, University of Virginia

Friday, September 4, 2009
Stern Center, Great Room, 4:30 p.m.
Bob Dylan popularized Eric Lott’s book by putting its title on his 2001 album “Love and Theft.” Dylan’s “lift” of the title reflected Lott’s view that appropriations are fundamental to popular culture and that artistic creativity has an important bearing on education and identity formation.

Following Professor Lott’s talk, there will be a barbecue and concerts by Structure of Feeling and Black Landlord, named the “best local band” by Philadelphia Magazine in August 2009. Concerts are co-sponsored by The Division of Student Development, the Office of Campus Life and the Multicultural Organizational Board.

Topical Background
Cultural theorist Raymond Williams claims that culture is “one of the two or three most complicated words in the English language.” Certainly the meaning of the term is highly contested.

In his book Cultural Theory and Popular Culture: An Introduction, John Storey identifies six different definitions of the term:

• The “culture which is widely favored or well liked by many people.”
• The culture which is “left over after we have decided what is high culture.”
• “Mass culture,” that is, Read more

New technology standards will shortly be finalized for the World Wide Web. These standards will transform the Web as we know it, permitting wide-spreadintegration of data, across an expanding range of Web sites and devices, and an explosion in the number of Web site creators and consumers. This future Web will be rich with disruption, opportunities, and challenges.

Topical Background
The Internet has become part of the daily lives of many people and organizations around the world. Emerging as one of the key dimensions of a globalized world, the Internet is accessible on many different types of devices, including cell phones and personal digital assistants.

The World Wide Web was created in 1989 by Sir Tim Berners-Lee, a British scientist working at the European Organization for Nuclear Research (CERN) in Geneva, Switzerland. Today, a strong force behind the promotion of a â€œWeb for Everyoneâ€ is the World Wide Web Consortium (W3C). Tim Berners-Lee and others created W3C as an industry consortium dedicated to building consensus around Web technologies.

This program will focus on how technology, law, and new consumer habits are changing the way we learn about the world, and what these changes will do to the way we live, work, and choose our leaders.

Issue in Context
Today, much of how we communicate is digitized. E-mail allows people who are often many miles apart to exchange news instantly. Instant messaging and video conferencing allows people to talk in real-time through their internet connection. Until very recently, the best mode of world-wide communication in real-time was a telephone call that was very expensive; but as the costs have dropped drastically over the past two decades, it is not unusual for elementary school children to have personal cell phones so that their parents can contact them directly any time. Before the telephone, a common method of contact was handwritten correspondence through what we now refer to as “snail mail.”
With electronic media available to increasing numbers of citizens around the world, how do people receive breaking news and crucial information? Important television news reports are broadcast live across Read more 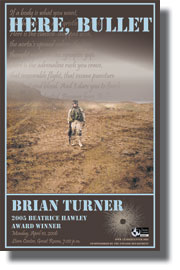 Issue in Context
A majority of the poems in Here, Bullet were written during Turner’s one-year tour in Iraq and reflect the struggle to understand his place in the War and the world. This first-hand account of the War in Iraq stands as a powerful witness to the actual events of the War. The poems are neither politically skewed nor do they make moral assumptions. Instead, they leave the reader to draw conclusions and feel the poetry.

The first and only of Brian Turner’s published books to date, Here, Bullet has garnered national acclaim. Both author and poetry have been featured in many publications and radio broadcasts, including Maine Things Considered and NPR. Here, Bullet is the recipient of the 2005 Alice James Books’ Beatrice Hawley Award.

â€¢ â€œThe day of the first moonwalk, my father’s college literature professor told his class, â€˜Someday they’ll send a poet, and we’ll find out what it’s really like.’ Turner has sent back a dispatch from a place arguably more incomprehensible than the moonâ€”the war in Iraq â€”and deserves our thanksâ€¦â€
– The New York Times Book Review Read more