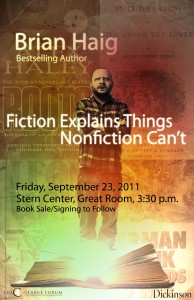 Friday, September 23, 2011
Stern Center, Great Room, **3:30 p.m.**
Book Sale/Signing will follow the lecture.
The Capital Game and Man in the Middle will be available for purchase.

Haig will discuss the impact of fiction on how readers understand their political and social worlds and how this understanding can shape their conduct and hence our future. For example, Tom Clancy introduced us to military technology, Dan Brown made us re-think religion, Steig Larsson made us see Sweden in a whole new way. Harriet Beecher Stowe’s Uncle Tom’s Cabin helped launch a civil war to end slavery; Herman Wouk’s The Winds of War kicked off the World War Two craze; Leon Uris’s Exodus shaped how Americans see Israel; and Alex Haley’s Roots explained the black experience in America.

Biography (provided by the speaker)
Brian Haig P’12 and P’13 graduated from West Point in 1975, spent 22 years on active duty, his last four as Special Assistant to the Chairman of the Joint Chiefs of Staff. After retiring from the Army, he was president of two companies before becoming a writer. He has published eight novels, several of which have been New York Times bestsellers. He has Masters from Harvard and Georgetown, and now lives in New Jersey with his wife and four children.