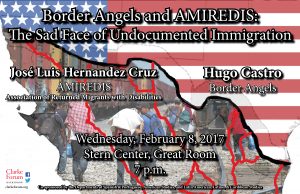 Two members of the organizations Border Angels and AMIREDIS will share their work with organizing disabled and undocumented immigrants within Central and North America.

This event is sponsored by the Clarke Forum for Contemporary Issues and co-sponsored by the Departments of Spanish and Portuguese, American Studies, and Latin American, Latino and Caribbean Studies. 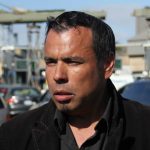 Hugo Castro is the son and grandson of Bracero Workers, Roberto Castro and Martin Velazquez. His childhood spanned both sides of the U.S. / Mexico Border. He was born in Salinas, Mexico, later his family migrated to Mexicali a town that borders Calexico, California, and after moving to the United States he graduated from Calexico High School in 1989.

Castro began organizing for immigrant rights in 2002, particularly around the Taft Correctional Institute where detained migrants suffered for 6 to 60 months in prison without contact from loved ones. Castro was mobilized by his incarceration in a federal, privately run, correctional institute. He served a two years sentence from 2001 to 2003 and was able to continue his education in prison. There he obtained an A.A in Liberal Arts, and A.S in General Business. Through his prison education he made the Dean’s List with a 3.78 GPA. After his goals and interests changed, starting with assisting fellow inmates, particularly migrants, to obtain medical attention, classes, and counseling.

Upon his release, he enrolled in SDSU, Imperial Valley Campus; Imperial Valley College; and Cetys University, Mexicali Campus. There Castro was nominated to Dean´s List on two occasions, obtaining a 4.00 GPA in 2005. His release also marked increased organizing of the migrant community in both Imperial Valley and Mexicali. His involvement was partially predicated on mass deportations in 2009, when Mexicali received hundreds of deported migrants daily. Castro cofounded a shelter for deported migrants called Hotel Migrante, which opened its doors in January 2010.

In 2009, Castro also joined the Border Angels. Through the Border Angels he coordinated a binational movement against Border Patrol Brutality, and Mexican Police Oppression against deportees, in Mexicali and Tijuana. He also coordinated occupy-like movements in Mexicali International Border, 2010 and 2013, in San Luis Sonora International Border, 2013, and in Tijuana, the longest of which was a 5 month-campaign, from August 7th to Dec 22, 2013. This campaign demanded that Mexican government authorities stop oppressing and illegally arresting deportees, and demanded programs to assist them. At the same time, Castro led a “sleep in” of 847 activists which contributed to the founding of The Baja California Migrant Support Council. Castro has also participated in the Border Angel’s Marchas Migrantes. One of these marches, a one-month Caravan from San Diego to Washington, helped spread awareness about immigrant rights. In his April 2013 he helped coordinate Caravan of Opening Doors to Hope with Father Alejandro Solalinde, Mexican Immigrant Rights Activist.

More recently, Castro has developed a network of immigrant rights activist and shelters in Baja California, and he supported efforts to form Veterans Without Borders, Deported and Families in Action, Angeles Sin Fronteras, and other emerging shelters.  As a result of massive migration of Haitians, Central Americans, and Mexicans fleeing violence, along with recently deported migrants, Baja California in general faces a severe humanitarian crisis. Castro took a leading role in supporting the opening of emergency shelters. And along with other Border Angels, he has developed a campaign to support emergent, needy shelters. As a leader of the Baja California campaign, he visits and supports 18 shelters by providing food and construction material. 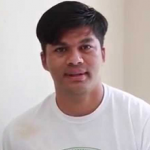 José Luis Hernandez Cruz is the spokesperson and leader of the Association of Returned Migrants with Disabilities (Asociación de Migrantes Retornados con Discapacidad, AMIREDIS). AMIREDIS is a group of thirteen Honduran migrants that were disabled by the infamous La Bestia freight train. Like other members of AMIREDIS Hernandez Cruz at first unsuccessfully immigrated north from Honduras, but in 2005 he used La Bestia to shorten his journey northward and lost limbs when he fell beneath the train wheels. Recognizing their common injury and their common plight once returned to Honduras where they could no longer work, Hernandez Cruz and others formed AMIREDIS. In 2016, Hernandez Cruz and AMIREDIS coordinated The Caravan of the Mutilated where these disabled men traveled the migrant trail in the hopes of illuminated the perils of the journey northward and to speak with President Barack Obama about the perils faced by Central American migrants. After being detained for 4 months in a Texas detention center, Hernandez Cruz and AMIREDIS have sought asylum in the United States and continued to speak out about the dangers and traumas produced on the migrant trail.