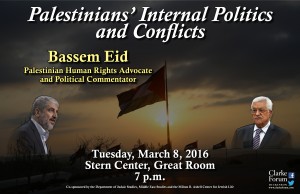 Since 2007, Palestinians have become so divided that reconciliation is in the interest of neither Hamas nor Abbas. Eid will discuss the internal politics and significance of this divide.

This event is sponsored by the Clarke Forum for Contemporary Issues and co-sponsored by the Department of Judaic Studies, Middle East Studies and the Milton B. Asbell Center for Jewish Life. 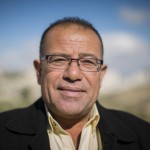 of his life in the Shuafat Refugee Camp on the outskirts of the city. He became a prominent figure during the first Intifada, the Palestinian uprising, as senior field researcher for B’Tselem, the Israeli Information Center for Human Rights in the Occupied Territories. He publicly condemned the widespread killing of Palestinian collaborators, often for reasons unrelated to the Intifada. In 1995, following his report about the Palestinian Preventative Security Service, he came under attack by some Palestinian leaders for revealing human rights violations committed by the Palestinian Authority. He continued his criticisms of both Israeli and Palestinian security forces. Arrested by Force 17, the Palestinian Presidential Guard, he was released after 25 hours following widespread and international condemnation. In response to the deterioration in the human rights situation under the PA, he founded the Palestinian Human Rights Monitoring Group (PHRMG): it monitors abuses committed by the PA, and also deals to some extent with Israel. It is a nonpartisan human rights organization, dedicated to exposing human rights violations and supporting a democratic and pluralistic Palestine. His publications include: Neither Law Nor Justice: Human Rights in the Occupied Territories Since the Oslo Accords (cowritten by PHRMG and B’Tselem); The State of Human Rights in Palestine I: The practice of torture by the Palestinian Authority, violations of freedom of the press and freedom of expression, deaths in custody, and police brutality (PHRMG); The State of Human Rights in Palestine II. Indepth report on the judicial system, illegal arrests, and long term illegal detention (PHRMG); Fatah and Hamas Human Rights Violations, in The Israel-Palestine Conflict, published by the University of California Los Angeles in 2011.

The Association for Civil Rights in Israel has awarded him its Emil Gruenzweig Memorial Award. He is also the recipient of the Robert S. Litvak Human Rights Memorial Award granted by the Faculty of Law at McGill University and the International Human Rights Advocacy Center, Inter Amicus; the International Activist Award given by the Gleitsman Foundation, USA; and the award of Italy’s Informazione Senza Frontiere (Information without Boundaries). In 2009, a book, Next Founders, profiled him as the leading Palestinian human rights activist.