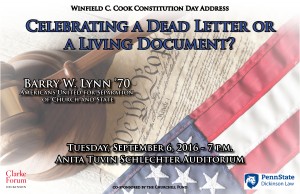 Executive Director, Americans United for Separation of Church and State

Celebrating a Dead Letter or a Living Document?

“Originalism” in Constitutional interpretation is often characterized as the only legitimate way to understand the Constitution. If that were true, the “Constitution” would be a dead letter by now, unable to protect the rights of Americans in rapidly changing times. 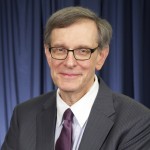 Since 1992, the Rev. Barry W. Lynn has served as executive director of Americans United for Separation of Church and State, a Washington, D.C.-based organization dedicated to the preservation of the Constitution’s religious liberty provisions.

In addition to his work as a long-time activist and lawyer in the civil liberties field, Lynn is an ordained minister in the United Church of Christ, offering him a unique perspective on church-state issues.

Lynn served for a decade as host of the syndicated radio show “Culture Shocks,” a daily look at various issues affecting society and the culture. In the 1990s he was the regular co-host of “Pat Buchanan and Company” and after that did a weekly syndicated radio program, “Review of the News,” with Col. Oliver North. Lynn is a regular guest on nationally broadcast radio programs, including National Public Radio’s “All Things Considered,” “The Diane Rehm Show,” “Morning Edition” and “Talk of the Nation.” He also appeared on every other national radio network.

In 2006, Lynn authored Piety & Politics: The Right-Wing Assault On Religious Freedom (Harmony Books). In 2008 he coauthored (with C. Welton Gaddy) First Freedom First: A Citizen’s Guide to Protecting Religious Liberty and the Separation of Church and State (Beacon Press). His latest book is God & Government: Twenty-Five Years of Fighting for Equality, Secularism, and Freedom Of Conscience (Prometheus Books).

Lynn writes frequently on religious liberty issues and has had essays published in outlets such as USA Today, Los Angeles Times, The Wall Street Journal and The Nation. Lynn also has op-eds published frequently by the McClatchy and Scripps-Howard newspaper chains.

A member of the Washington, D.C. and U.S. Supreme Court bar, Lynn earned his law degree from Georgetown University Law Center in 1978. In addition, he received his theology degree from Boston University School of Theology in 1973.

Lynn is the winner of many national awards, including the Freedom of Worship Award from the Roosevelt Institute, the Puffin/Nation Foundation’s Creative Citizenship Award, the American Humanist Association’s Religious Liberty Award and an award from the Hugh H. Hefner Foundation for his work to protect freedom of speech. In addition, he has received two awards from Dickinson College in Carlisle, Pa., where Lynn earned a Bachelor’s degree in English in 1970. In 2007, he was chosen as one of the 25 Most Influential Dickinsonians. In 2010, Lynn was given the college’s Professional Achievement Award.

Lynn, who was born in Harrisburg, Pa., and raised in Bethlehem, Pa., lives in Chevy Chase, Md., with his wife Joanne. They have two children.

Winfield C. Cook Constitution Day Address
The annual address is endowed through the generosity of Winfield C. Cook, former Dickinson Trustee. Each year the Clarke Forum invites a prominent public figure to campus to speak on a contemporary issue related to the Constitution. The event celebrates the signing of the United States Constitution and commemorates Dickinson’s connection to that document, through John Dickinson’s participation as an original signer. Previous speakers have included Kenneth Starr, Ira Glasser, Lowell Weicker, Marjorie Rendell, Tom Ridge and  Michael Chertoff.