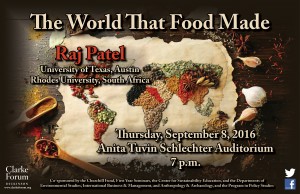 The World That Food Made

We hear a great deal about the food system, about how it’s broken or – indeed – that it’s working exactly as it ought. But it’s not exactly clear what that system is. Once you learn to think systemically, it becomes clear that the most important things the food system has made are things you can’t eat.

This program is sponsored by the Clarke Forum for Contemporary Issues and co-sponsored by the Churchill Fund, First Year Seminars, the Center for Sustainability Education and the Departments of Environmental Studies, International Business & Management, Anthropology & Archaeology, Biology and the Program in Policy Studies. It is also part of the Clarke Forum’s semester theme, Food and the Leadership in an Age of Uncertainty Series. 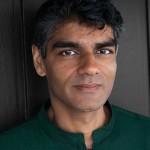 Raj Patel is an award-winning writer, activist and academic. He is a research professor in the Lyndon B Johnson School of Public Affairs at the University of Texas, Austin and a senior research associate at the Unit for the Humanities at the university currently known as Rhodes University (UHURU), South Africa.

He has degrees from the University of Oxford, the London School of Economics and Cornell University, has worked for the World Bank and WTO, and protested against them around the world. He has been a visiting scholar at UC Berkeley’s Center for African Studies, an honorary research fellow at the School of Development Studies at the University of KwaZulu-Natal and continues to be a fellow at The Institute for Food and Development Policy, also known as Food First. In 2016 was recognized with a James Beard Foundation Leadership Award. Patel co-taught the 2014 Edible Education class at UC Berkeley with Michael Pollan. He was also an IATP Food and Community Fellow from 2011-2013. He has testified about the causes of the global food crisis to the US House Financial Services Committee and was an advisor to Olivier De Schutter, the United Nations Special Rapporteur on the Right to Food.

In addition to numerous scholarly publications in economics, philosophy, politics and public health journals, he regularly writes for The Guardian, and has contributed to the Financial Times, Los Angeles Times, New York Times, Times of India, The San Francisco Chronicle, The Mail on Sunday, and The Observer. His first book was Stuffed and Starved: The Hidden Battle for the World Food System and his latest, The Value of Nothing, is a New York Times best-seller.

He can be heard co-hosting the fortnightly food politics podcast The Secret Ingredient with Mother Jones’ Tom Philpott, and KUT’s Rebecca McInroy. He is currently working on a ground-breaking documentary project about the global food system with award-winning director Steve James. He’s also completing a book on world ecology with Jason W Moore for the University of California Press entitled “Seven Cheap Things.”