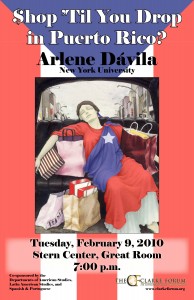 Shop ‘Til You Drop in Puerto Rico?

Dávila will explore the consumption culture of Puerto Rico, in particular, the myth of the overspent Puerto Rican consumer.

Topical Background
Shortly after Columbus visited Puerto Rico, Spain colonized the island and established it as an important military and trading post. Soon thereafter, colonists began to coerce natives into a system of forced labor that was slavery in all but name. Sugar quickly became the most important agricultural product. Although the system of forced labor was formally abolished in 1720, sugar remained a significant export for Puerto Rico, along with cattle, tobacco and coffee.

During the 19th century, Puerto Ricans were clamoring for independence. In response, Spain conceded political and administrative autonomy to the Puerto Rican Autonomous Party in 1887. However, after the Mexican War, the Treaty of Paris called for the transfer of Puerto Rico’s sovereignty to the United States. At this time, Puerto Rico and the United States enjoyed a free trade relationship. In 1917, President Wilson signed the Jones Act which identified Puerto Rico as a United States’ territory. Ten years later, the American Great Depression prompted unemployment and hunger on the island. “Operation Bootstrap,” a major attempt to industrialize Puerto Rico, took place after World War II. Since then, the manufacturing system has shifted from labor intensive industries to capital intensive industries.

Puerto Rico has experienced a number of major fiscal crises during recent economic history. In 2006, a 740 million dollar deficit in public funds caused schools and governmental offices to shut down. Only essential services continued to function for two weeks. Puerto Rico’s economy has been exacerbated by the ongoing economic crisis. At the present time, Puerto Rico faces a huge debt load, an unemployment rate of 16%, and an average household
income of only $18,610 per year. 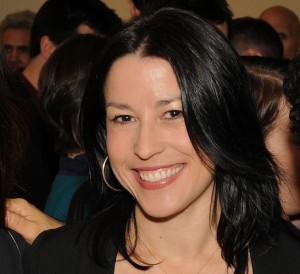 About the Speaker
Arlene Dávila is a professor of anthropology and American studies at New York University. She has written many publications focusing on the intersection between consumption, culture, politics, and globalization. Her other areas of specialty include urban studies, nationalism, and the experience of Latinos in the United States. Professor Dávila’s most recent publication, Latino Spin: Public Image and the White Washing of Race, was released in 2008. Her other books include Barrio Dreams: Puerto Ricans, Latinos, and the Neoliberal City and Latinos Inc: Marketing and the Making of a People.