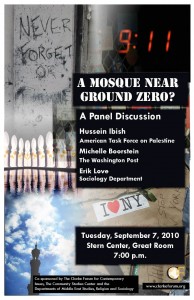 The panelists will discuss the nature and extent of American Islamophobia in the context of the ongoing controversy regarding whether an Islamic community center should be built near Ground Zero, focusing in part on the proper balance between religious freedom, the concerns and rights of the victims and survivors of the 9/11 attacks, and the needs of national security.

This event is co-sponsored by the Departments of Religion and Sociology, Middle East Studies and the Community Studies Center.

Biographies (provided by the panelists)
Michelle Boorstein , a native of suburban Boston, graduated from the University of Wisconsin-Madison, where she studied history and journalism. She worked what was once the traditional print journalism path, starting at a small city newspaper before joining the Associated Press where she spent eight years in bureaus including Providence, Phoenix, New York City, Nairobi and Afghanistan. She was a general reporter and a foreign editor at the AP before coming to The Washington Post in 2002 to do roving features on Virginia. Years spent living in Israel and studying the Middle East (a subject in which she later received a master’s degree from New York University) fueled her desire to write about religion and the ways it shapes identities (including her own), and she began that beat in 2005. She writes about everything from Pope Benedict to Glenn Beck and blogs about religion and government at the Post’s religion site, On Faith.

Hussein Ibish is a senior fellow at the American Task Force on Palestine (ATFP) and executive director of the Hala Salaam Maksoud Foundation for Arab-American Leadership.

Ibish has made thousands of radio and television appearances and has written for many newspapers, including the Los Angeles Times, the Washington Post and the Chicago Tribune. He was the Washington, DC correspondent for the Daily Star (Beirut).

His most recent book is “What’s Wrong with the One-State Agenda? Why Ending the Occupation and Peace with Israel is Still the Palestinian National Goal” (ATFP. 2009).

From 1998-2004, Ibish served as communications director for the American-Arab Anti-Discrimination Committee (ADC), the largest Arab-American membership organization in the United States. From 2001-2004 he was vice-president of the National Coalition to Protect Political Freedom. He has a Ph.D. in Comparative Literature from the University of Massachusetts, Amherst.

Erik Love is a Ph.D. candidate in sociology at the University of California, Santa Barbara. His research centers on the impact of race and ethnicity, with a focus on activism that attempts to redress racialized inequality. His dissertation, entitled “Confronting Islamophobia: Civil Rights Advocacy in the United States,” considers the ways in which advocacy organizations have worked to address racialized Islamophobia since 1980. Research for this project is supported with a grant from the National Science Foundation. Love has presented findings from this research at several academic conferences, and an article based on this research appeared in a special issue of Patterns of Prejudice in 2009.

David Commins is professor of history. He earned his B.A. at the University of California, Berkeley, and his Ph.D. from the University of Michigan. He has received Fulbright grants to fund Arabic study at Damascus University (1981-82), to research Islamic modernism in Ottoman Syria (1982-1983), and to study Wahhabism in Saudi Arabia (2001-2002). He regularly offers courses on Islamic Civilization, modern Middle East history, Arab-Israeli Conflict, Islam, India, and Historical Method. A specialist in modern Islamic thought, Commins’s publications include journal and encyclopaedia articles on the subject as well as Islamic Reform: Politics and Social Change in Late Ottoman Syria and Historical Dictionary of Syria. His latest book is The Wahhabi Mission and Saudi Arabia.