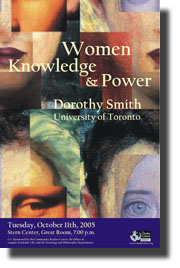 Issue in Context
In 1833, Oberlin College became the first co-educational college in the United States. The 19th Amendment, giving women the right to vote, was ratified in 1920 and Congress passed the Equal Employment Opportunity Act in 1972. In 1981, Sandra Day O’Connor became the first woman appointed to the U.S. Supreme Court.

The word “feminist” first appeared in the 19th century and the modern feminist movement took off with passion in the 1960s. Yet, though the twentieth century saw a wave of progress in achieving women’s rights, many believe that women still have obstacles to overcome.

Dorothy Smith has argued forcefully that some of those obstacles lie squarely within the academy and in the nature of scholarly work and scientific research. In particular, Smith contends that commonly accepted social science models are problematic for women, and indeed for everyone, because women’s experience did not play a role in their development. Though women have made tremendous strides in the field of sociology over the past century, Smith believes that sociology (and more generally the social sciences) remains dominated by a male perspective and ideology. Thus, the mainstream concepts and theories differ in crucial ways
from women’s actual experiences in their everyday worlds.

In this lecture, Smith will focus on new research strategies that proceed from the standpoint of women, and that challenge official, objectified forms of knowledge. Smith will also consider how women can begin to rethink and reimagine their everyday lives in different terms.

About the Speaker
Dorothy Smith received her doctorate from the University of California- Berkeley in 1963. Smith is currently a professor emerita in the Department of Sociology and Equity Studies in Education at the Ontario Institute for Studies in Education, at the University of Toronto. Smith’s scholarship, including numerous books and articles, has been extremely influential, even groundbreaking, within and across several disciplines.

Her work continues to profoundly impact many sub-fields of sociology including feminist theory and methodology, sociology of knowledge, ethnography, organizational studies, and family studies and finds relevance in such disciplines as women’s studies, psychology, and educational studies.

Smith’s works include: Writing the Social: Critique, Theory, and Investigations (1999); The Conceptual Practices of Power: A Feminist Sociology of Knowledge (1990); Texts, Facts, and Femininity: Exploring the Relations of Ruling (1990); The Everyday World is Problematic: A Feminist Sociology (1987) and Feminism and Marxism: A Place to Begin, A Way to Go (1977).

Smith’s scholarship, particularly in light of its vital contribution to the discipline of sociology, has earned her numerous honors and awards including the American Sociological Association’s Career of Distinguished Scholarship Award (1999), the Jessie Bernard Award for Feminist Sociology (1993), and two awards from the Canadian Sociology and Anthropology Association; the Outstanding Contribution Award (1990) and the John Porter Award for The Everyday World is Problematic (1990).