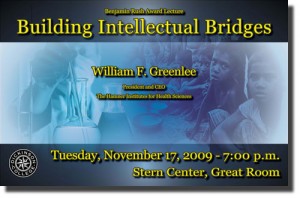 President and CEO of The Hamner Institutes for Health Sciences

The goal of research and scholarship is the pursuit of new knowledge. That pursuit expands the intellectual endowment, but without a purpose and plan for the endowment’s use, new knowledge does not benefit society as much as it could. Scholars must take a leading role in the translation of discoveries and new knowledge into products, policies, and guidance for the benefit of all.

Benjamin Rush Award
The Benjamin Rush Award Ceremony recognizes outstanding achievement by a member of the business or government community. The individual accepting the award presents a public lecture addressing the relationship of a liberal arts education to the business or government world. Opportunities for members of the College community to converse and discuss issues with the award recipient occur while the recipient is on the campus. Click here for listing of past recipients.

Topical Background
The Hamner Institutes for Health Sciences is an independent, nonprofit organization that unites academia, the private sector, and government in the conduct of research to achieve improved human health assessments and the development of new and safer medicines. Hamner stimulates and facilitates the modernization of the scientific process through which a potential human drug, diagnostic agent, or medical device is transformed from a discovery, or proof of concept, into a medical product.

The Hamner exists outside the boundaries of the traditional university, yet it facilitates joint initiatives with Duke University and schools within the University of North Carolina college system. Through these collaborative initiatives with universities and the seamless integration with the life sciences industry, the investment in biomedical research by the public and private sectors will be more effectively translated into products that will improve human health. The Hamner offers all of the intellectual, collegial and scientific benefits of a leading research university. The Hamner partners with the National Institute of Environmental Health Sciences, the U.S. Environmental Protection Agency, and other government regulatory agencies, while maintaining strong ties to the pharmaceutical and related industries.

Biography (about the speaker)
William F. Greenlee, Ph.D. is president and chief executive officer of The Hamner Institutes for Health Sciences, and chief executive officer and chairman of the Health Research and Education Foundation at The Hamner. Based in the Research Triangle Park (RTP) of North Carolina, The Hamner is an independent, nonprofit organization that unites academia, the private sector, and government to conduct translational research for improved human health assessments and the development of new and safer medicines.

The Hamner answers the FDA’s Critical Path Initiative — an effort to stimulate and facilitate the modernization of the scientific process through which a potential human drug, diagnostic agent, or medical device is transformed from a discovery or “proof of concept” into a medical product. Dr. Greenlee is the visionary behind The Hamner and has spent his professional career treading intertwining paths of academe and translational research for the advancement of public health.

Early in his career, Dr. Greenlee was a postdoctoral fellow at the Chemical Industry Institute of Toxicology (CIIT), The Hamner’s predecessor. CIIT was launched in 1974 by the visionary leaders of 11 different chemical companies and since then has carried out environmental risk assessment research, trained hundreds of postdoctoral fellows, and published thousands of papers in scientific publications. In less than two years as a postdoc at CIIT, Dr. Greenlee published seven papers. Deciding at first to pursue an academic career, he accepted a position in 1980 as assistant professor of toxicology at Harvard University’s School of Public Health. When he left North Carolina for Massachusetts, Dr. Greenlee did not know that he would return to CIIT — not once but several times, in different capacities — and eventually mold the organization into the world-class, preeminent biomedical sciences research and education institute that it is today.

As one of the first professors in the Laboratory of Toxicology at the Harvard School of Public Health, Dr. Greenlee held a joint appointment in the Program in Cellular and Developmental Biology at Harvard Medical School. The intellectually rich Harvard experience shaped him and provided an appreciation of the benefits of collaboration between the halls of academe and a cadre of research scientists. When CIIT asked Dr. Greenlee to come back to work as a scientist in its Department of Cellular and Molecular Toxicology, he accepted and rose to the position of chairman in 1988. During this time at CIIT, Dr. Greenlee led the organization in establishing a presence within the scientific community for the use of sound science in assessing human health risks from environmental exposures. Dr. Greenlee was recruited to Purdue University in Indiana in 1991 as professor and head of the Department of Pharmacology and Toxicology at the School of Pharmacy and Pharmacal Sciences. Increasingly, Dr. Greenlee saw his life’s purpose as that of translating discoveries in the laboratory to new medicines and policies to protect human health and treat disease.

From 1995 to 1999, Dr. Greenlee was professor and chair of the Department of Pharmacology and Molecular Toxicology at the University of Massachusetts Medical School (UMMS) in Worcester. Today UMMS is ranked fourth in primary care education among the nation’s 125 medical schools by U.S. News & World Report but back in the 1970s when it was first established, some thought the school was doomed to fail. The Chancellor of the time, however, was a man of vision who realized that to become a great teaching institution, UMMS had to also become a great research institution. To ensure this happened, the Chancellor hired faculty such as Dr. Greenlee, those with strong research backgrounds. While Dr. Greenlee taught and led research efforts at the University of Massachusetts, he observed firsthand the process by which research becomes translated into public health initiatives. He saw that translational research — sometimes called “bench to bedside” — requires concentrated bridge building to achieve the ultimate purpose of linking scientific advances with new and safer medicines. During this period, Dr. Greenlee’s widely respected dioxin research at the University of Massachusetts, done in partnership with the University of Aberdeen in Scotland, led to a DNA cancer vaccine now in clinical trials at the Dana Farber Cancer Institute and Massachusetts General Hospital.

Through the culmination of his professional experiences, Dr. Greenlee began to foresee that a new type of organization was required — one that was open, collaborative and cross-disciplinary. When in 1999 he was asked to return once again to CIIT, this time as chief executive officer and president, Dr. Greenlee was in a position to refocus CIIT’s research vision. First he steered CIIT through the final stages of its transition from an institute sponsored by CIIT member companies to an organization with a broadened funding base from both the private and public sectors. Today, The Hamner receives significant funding through competitive grant awards from the National Institutes of Health and other government agencies and foundations. This repositioning was based on the formation and integration of centers of excellence in genomics and molecular genetics, computational biology and bioinformatics, and extrapolation modeling and risk assessment, and translational human disease research. In keeping with Dr. Greenlee’s vision, the institute changed its name to the CIIT Centers for Health Research. Dr. Greenlee led the restructuring of CIIT’s core research program using a systems biology approach, which emphasizes the integration of laboratory research and computational modeling and allows researchers to better assess the impact of environmental exposures on human health.

Under Dr. Greenlee’s leadership, The Hamner Institutes for Health Sciences offers all of the intellectual, collegial and scientific benefits of a leading research university and as an independent biomedical research organization, facilitates joint initiatives with Duke University and The University of North Carolina at Chapel Hill, as well as schools within the UNC college system and the southeast region. Through these collaborative initiatives with universities and the seamless integration with the life sciences industry and federal government regulatory agencies, the investment in biomedical research by the public and private sectors is more effectively being translated into products and public health policies that will improve and protect human health.

The author of numerous scientific publications, Dr. Greenlee was an honors graduate with a Bachelor of Science in Chemistry from San Jose State University in California in 1969 and a Master of Science in Chemistry from San Jose State University in 1973. He earned a Ph.D. in Pharmacology from the University of Rochester in New York in 1978. Dr. Greenlee’s was elected by his peers to serve as president of the Society of Toxicology, the world’s largest toxicology and environmental health sciences professional society. A fellow of the Academy of Toxicological Sciences, he is adjunct professor at the Department of Environmental and Molecular Toxicology at North Carolina State University in Raleigh. Dr. Greenlee chaired the board of directors for the North Carolina Association for Biomedical Research and served as vice chair of the National Research Council Committee on Emerging Issues in Environmental Health Research for the National Academy of Sciences.