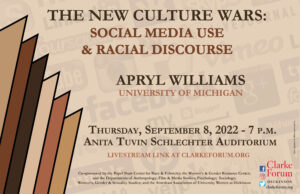 Apryl Williams,  Assistant Professor of Communication and Digital Studies at the University of Michigan

Racial trouble and civil unrest reached a new peak after the 2016 presidential election. The deaths of George Floyd, Ahmaud Arbery, and Breonna Taylor ushered in a resurgence of the Black Lives Matter Movement during the spring and summer of 2020. At the same time, the onset of the COVID-19 pandemic shone a light on widespread anti-Asian sentiment in the US. People have deeply emotional views on both sides of the issue yet, having an exchange of ideas has become increasingly difficult, especially online. This lecture will explore why it can be emotionally triggering to talk about race and how imbalanced the burden of emotional labor can be when constrained by social conventions of civility. Williams will cover research highlighting gendered roles in heated racial discussions and explore how we might step into anti-racism framing, discourse, and living.

This program is sponsored by the Clarke Forum for Contemporary Issues and co-sponsored by the Popel Shaw Center for Race & Ethnicity; the Women’s & Gender Resource Center; and the departments of anthropology; film & media studies; psychology; sociology; women’s, gender & sexuality studies, and the American Association of University Women at Dickinson. This program was initiated by the Clarke Forum’s student project managers. 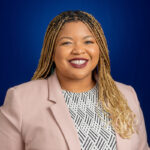 Dr. Apryl Williams is an assistant professor of communication and digital studies at the University of Michigan. She is also a faculty associate at Harvard University’s Berkman Klein Center for Internet & Society, a senior fellow in Trustworthy AI at the Mozilla Foundation, and an affiliated researcher at NYU’s Center for Critical Race & Digital Studies. Williams studies digital media and algorithmic technologies as they converge with issues concerning race/ethnicity, gender, collective identities, and popular culture. Her work on racialized experiences with social media and bias in technology has been published in leading interdisciplinary journals including Social Media + Society and the Sociology of Race and Ethnicity. Williams’s research has also been covered in popular press outlets including Time, Wired, Mic.com, Newsweek, Slate, NPR’s On the Media, and The Guardian.