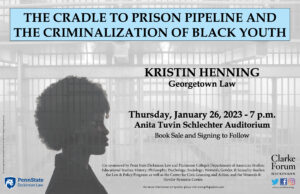 This event is in-person only. It will not be livestreamed or recorded.

The Cradle to Prison Pipeline and the Criminalization of Black Youth

Drawing upon twenty-five years of experience representing young people in Washington, D.C.’s juvenile courts, Kristin Henning confronts America’s irrational and manufactured fears of Black youth and makes a compelling case that the nation’s obsession with policing and incarcerating Black America begins with Black children. Unlike White youth, who are afforded the freedom to test boundaries, experiment with sex and drugs, and figure out who they are and who they want to be, Black youth are seen as a threat to White America and denied the privilege of healthy adolescent development. Weaving together powerful narratives and persuasive data, Henning examines the criminalization of Black adolescent play and sexuality, the demonization of Black fashion, hair, and music, and the discriminatory impact of police in schools.

This event is sponsored by the Clarke Forum for Contemporary Issues and co-sponsored by Penn State Dickinson Law; the Center for Civic Learning & Action; the Women’s & Gender Resource Center; and the departments of American studies; educational studies; history; philosophy; psychology; sociology; women’s, gender & sexuality studies; and the law & policy program. This event was initiated by the Clarke Forum’s student project managers. 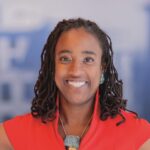 Kristin “Kris” Henning is the Blume Professor of Law and director of the Juvenile Justice Clinic and Initiative at Georgetown Law, where she supervises law students and represents children arrested in Washington DC. Before joining Georgetown’s faculty in 2001, Henning was an attorney at the Public Defender Service for the District of Columbia where she helped organize and lead a Juvenile Unit designed to meet the multi-disciplinary needs of children in the juvenile legal system.

Henning writes extensively about race, adolescence, and policing. Her previous work appears in journals and books such as Policing the Black Man: Arrest, Prosecution and Imprisonment (2017, edited by Angela J. Davis) and Punishment in Popular Culture (2015, edited by Charles J. Ogletree, Jr. and Austin Sarat). Race features prominently in her articles such as “The Reasonable Black Child: Race, Adolescence and the Fourth Amendment;” “Race, Paternalism and the Right to Counsel;” and “Criminalizing Normal Adolescent Behavior in Communities of Color: The Role of Prosecutors in Juvenile Justice Reform.” Henning is also an editor and co-author of an anthology, Rights, Race, and Reform: Fifty Years of Child Advocacy in the Juvenile Justice System (2018).

Henning has trained state actors across the country on the nature and scope of racial bias and how it operates in the juvenile and criminal legal systems. Her workshops help stakeholders recognize their own biases and develop strategies to counter it and equip defenders to challenge racial injustice in their individual case advocacy and broader systemic reform efforts. Professor Henning also worked closely with the McArthur Foundation’s Juvenile Indigent Defense Action Network to develop a 41-volume Juvenile Training Immersion Program (JTIP), a national training curriculum for juvenile defenders. She now co-hosts, with the National Juvenile Defender Center (NJDC), an annual week-long JTIP summer academy for defenders. In 2019, she partnered with NJDC to launch Racial Justice for Youth: A Toolkit for Defenders, and again in 2020 to launch the Ambassadors for Racial Justice program, a year-long program for defenders committed to challenging racial inequities in the juvenile legal system.

Henning serves on the board of directors for the Center for Children’s Law and Policy and is the director of the Mid-Atlantic Juvenile Defender Center. She has served as an expert consultant on juvenile justice to a number of state and federal agencies, including the USDOJ’s Civil Rights Division, and was the reporter for the ABA Task Force on Dual Jurisdiction Youth.

Henning is the recipient of many honors, including the 2021 Juvenile Leadership Prize, the Robert E. Shepherd, Jr. Award for Excellence in Juvenile Defense from NJDC, the Shanara Gilbert Award from the American Association of Law Schools for her commitment to justice on behalf of children, and appointment as an Adviser to the American Law Institute’s Restatement on Children and the Law project. In 2005, Professor Henning was selected as a Fellow in the Emerging Leaders Program of the Duke University Terry Sanford Institute of Public Policy and the Graduate School of Business at the University of Cape Town, South Africa. Henning also traveled to Liberia in 2006 and 2007 to aid the country in juvenile justice reform. She received her B.A. from Duke University, a J.D. from Yale Law School, and an LL.M. from Georgetown Law.