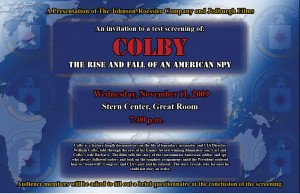 Test Screening of the Documentary

Colby is a feature-length documentary on the life of legendary spymaster and CIA Director William Colby, told through the eyes of his Emmy-Award-winning filmmaker son, Carl and Colby’s wife Barbara. The films tells the story of the consummate American soldier and spy who always followed orders and took on the toughest assignments until the President ordered him to “stonewall” Congress and CIA’s past and he refused. The story reveals why for once he could not obey an order.

Carl Colby will be available to answer questions at the end of the presentation.

Audience members will be asked to fill out a brief questionnaire at the conclusion of the screening.