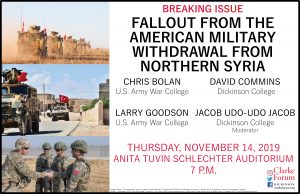 The recent abrupt withdrawal of United States military forces from the Syrian side of the border with Turkey immediately and drastically altered the balance of power in that volatile region. The panel will explore the ramifications of the U.S. withdrawal: Turkey’s military intervention, the dismantling of the Syrian Kurds’ autonomous zone, Russia’s ascent as the main powerbroker in Syria, the decline of American influence, and the prospect of a revival of the Islamic State.

Chris Bolan is professor of Middle East security studies at the Strategic Studies Institute of the U.S. Army War College where he researches, publishes, and teaches graduate level courses on U.S. national security, foreign policy, and the Middle East.  He served as a foreign policy advisor on Middle East and South Asia affairs for Vice Presidents Gore and Cheney from 1997-2003.  He is a retired U.S. Army colonel with overseas tours in Korea, Egypt, Jordan, and Tunisia.  He holds a Ph.D. in international relations and master of arts degree in Arab studies from Georgetown University.  He is also a senior fellow at the Foreign Policy Research Institute – a non-profit, non-partisan organization devoted to “bringing the insights of scholarship to bear on the foreign policy and national security challenges facing the United States.” His most recent article is “10 Hard Realities of America’s Next Syria Policy” published by DefenseOne on October 18, 2019.

David Commins is professor of history and the Benja 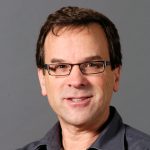 min Rush Distinguished Chair in Liberal Arts and Sciences at Dickinson College.  He obtained his undergraduate degree in history from UC Berkeley and a Ph.D. in Middle East history from the University of Michigan.  He has written on Syrian history, modern Islamic thought, Saudi Arabia, and the Persian Gulf. 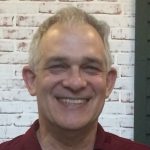 Larry P. Goodson is professor of Middle East studies at the U.S. Army War College, where he is the only person to hold the General Dwight D. Eisenhower Chair of National Security twice (2014-2017, 2004-2007).  In AY19 he was on sabbatical from the War College as a visiting fellow in the Changing Character of War Center, Pembroke College, Oxford University.  Since joining the U.S. government in 2002, Goodson has been continually called upon to serve as a regional advisor on Afghanistan, Pakistan, and the Middle East by senior U.S. military and political leaders.

Among his other academic appointments, Goodson taught at the American University in Cairo (1994-2000) and conducted his dissertation field work in Peshawar, Pakistan (1986-1987).  Dr. Goodson completed all his academic work at the University of North Carolina.  He is the author of the New York Times bestselling Afghanistan’s Endless War: State Failure, Regional Politics, and the Rise of the Taliban (2001) as well as numerous chapters and articles.  Currently, he is writing “First Great War of the 21st Century: From Syria to the South China Sea,” which argues that a war between China, Russia, and the United States is underway and that Syria is one of the most significant theaters in the early stages of that war. 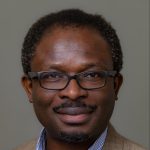 Jacob Udo-Udo Jacob is a visiting international scholar in international studies at Dickinson College. His teaching and research interest is located at the intersections between communications (broadly defined) and violent extremism, war and peace in contemporary society. Before coming to Dickinson, Jacob was chair of the Communications and Multimedia Program and dean of arts and science at the American University of Nigeria.  Jacob currently co-leads the development of an ethical and methodological guide on preventing/countering violent extremism (P/CVE) research for the RESOLVE Network – a policy, practice and research hub on P/CVE, housed within the United States Institute of Peace. Twitter: @Jakes247