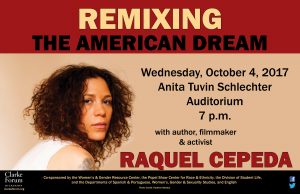 The American Dream, Cepeda argues, is a pipedream for some and a birthright for others. Challenging the absurdity of the black-white national conversation about the American dream, Cepeda offers a working and accessible revision to suit generations of Americans, like her, who have been pushed to the margins.

This event is sponsored by the Clarke Forum for Contemporary Issues and co-sponsored by the Women’s & Gender Resource Center, the Popel Shaw Center for Ethnicity & Race, the Division of Student Life, and the Departments of Spanish & Portuguese, English, and Women’s, Gender & Sexuality Studies. 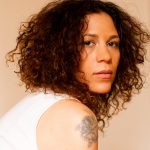 Born in Harlem to Dominican parents, award-winning journalist, cultural activist, podcaster, and documentary filmmaker Raquel Cepeda is the author of Bird of Paradise: How I Became Latina. Equal parts memoir about Cepeda’s coming of age in New York City and Santo Domingo, and detective story chronicling her year-long journey to discover the truth about her ancestry, the book also looks at what it means to be Latinx today. Cepeda’s latest documentary Some Girls, produced by Henry Chalfant and Sam Pollard, focuses on a group of troubled Latina teens from a Bronx-based side prevention program who are transformed by an exploration of their roots via the use of ancestral DNA testing, followed by a treat to the seat of the Americas. Cepeda is currently in production on her next documentary and currently writing East of Broadway, a story about one community in New York as soon through the lives of several of its inhabitants. She lives with her husband, Sacha Jenkins, a filmmaker, musician, and creative agency partner, her daughter, 20, and five-year-old son in New York City, “…concrete jungle where dreams are made of [and] there’s nothin’ you can’t do…”