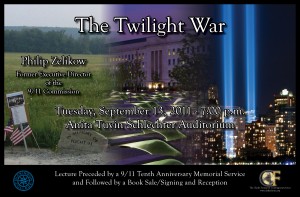 Former Executive Director of the 9/11 Commission

Zelikow will take stock of the ten years of conflict since 9/11 and discuss the agenda now. He will reflect on the Commission’s work and on the way a “paradox of prevention” before 9/11 has now been replaced by a “paradox of adjustment.” Zelikow will offer an assessment of the ongoing fights in Afghanistan, Pakistan, and the rest of the Arab and Muslim world. In addition, he will review what has gone right, and not so right, in the changing organization of American government to deal with dangers like terrorism.

Philip Zelikow is the White Burkett Miller Professor of History and Associate Dean of Graduate Programs at the University of Virginia.  Zelikow began his professional career as a trial and appellate lawyer in Texas. His Ph.D. is from Tufts University’s Fletcher School.  He was a career diplomat, posted overseas and in Washington, including service on the NSC staff for President George H.W. Bush. Since 1991 he has taught and directed research programs at Harvard University and at the University of Virginia.  His books include Germany Unified and Europe Transformed (with Condoleezza Rice), The Kennedy Tapes (with Ernest May), and Essence of Decision (with Graham Allison).  In addition to service on some government advisory boards, and as an elected member of a local school board, he has taken two public service leaves from academia to return full-time to government service, in 2003-04 to direct the 9/11 Commission and in 2005-07 as Counselor of the Department of State, a deputy to Secretary Rice.  He also advises the Bill & Melinda Gates Foundation’s program in global development and is a consultant to the Office of the Secretary of Defense.