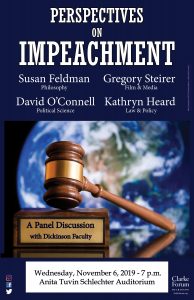 A panel discussion on the general topic of impeachment in the context of the ongoing impeachment inquiry of President Donald Trump from legal, political, ethical, and media perspectives.

Susan Feldman is professor of philosophy at Dickinson College. Her interests include the history of modern philosophy, the problem of knowledge and skepticism, philosophy of science and ethics, both “pure” and “applied” to such areas as the environment, the status of women, medicine and public policy.

Kathryn Heard is a professor in the departments of political science and law & policy studies at Dickinson College, where she specializes in constitutional jurisprudence, political theory, issues of power, belonging, and recognition in democratic societies, and feminist and queer theories.  Her work has been supported by the Mellon Discovery Foundation and the Coblentz Civil Rights Endowment Fund, and her research has appeared in The Journal of Law, Culture, and Humanities, edited volumes published by Cambridge University Press, and The Christian Science Monitor.  She is currently working on a book manuscript that examines how legal and political actors use discourses of reason to delimit the boundaries of religious freedom.

David O’Connell is an assistant professor of political science at Dickinson College. His major research interests include the presidency and the role of religion in American politics.  O’Connell is the author of God Wills It: Presidents and the Political Use of Religion (Routledge, 2014), and his research and writing has appeared in, or is forthcoming in, Presidential Studies Quarterly, Politics and Religion, Political Science Quarterly, Social Media + Society, and White House Studies.  A frequent media commentator on American politics, O’Connell has been interviewed by C-SPAN, Fox News, ABC 27, CBS 21, FOX 43, WGAL 8 and WITF, and he has been quoted by national print outlets ranging from CNN to The Christian Science Monitor to the Associated Press. O’Connell received his M.A., M.Phil., and Ph.D. in political science from Columbia University, and holds a B.A. in political science and economics from the University of Pennsylvania, where he graduated with Phi Beta Kappa honors. O’Connell is the 2018 recipient of Dickinson’s Constance & Rose Ganoe Memorial Award for Inspirational Teaching.

Gregory Steirer is an assistant professor of English and film & media Studies at Dickinson College, where he specializes in media industries, digital culture, and intellectual property law. His research in these areas has been supported by the National Endowment for the Humanities and the Connected Viewing Initiative of the Carsey-Wolf Center and has been published in a variety of journals and edited collections including Convergence, Television & New Media, Media, Culture and Society, and Connected Viewing: Selling, Streaming, & Sharing Media in the Digital Era.