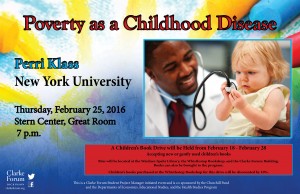 Poverty as a Childhood Disease

This talk will look at what poverty does to children, through lenses ranging from fairy tales to health statistics, and discuss the ways in which we can look at childhood poverty as a disease, stunting and depriving children’s minds and bodies–and use that perspective to find ways to think about mitigating the damage and reducing the disease itself.

A children’s book drive is associated with this program and it runs from February 18 – February 25. New and gently used children’s books are being accepted. Bins are located at the Clarke Forum, Waidner-Spahr Library and the Whistlestop Bookshop (Whistlestop is offering a 10% discount on books being donated for this drive.)

Perri Klass, MD, is professor of journalism and pediatrics at New York University, where she is director of the Arthur L. Carter Journalism Institute. She attended Harvard Medical School and completed her residency in pediatrics at Children’s Hospital, Boston. She has received numerous awards for her work as a pediatrician and educator; including the 2007 American Academy of Pediatrics Education Award, which recognizes her educational contributions which have had a broad and positive impact on the health and well-being of children and the 2011 Alvarez Award from the American Medical Writers Association.

Klass has written extensively about medicine, children, literacy, and knitting. Her nonfiction includes Every Mother is a Daughter: the Neverending Quest for Success, Inner Peace, and a Really Clean Kitchen, which she coauthored with her mother, and Quirky Kids: Understanding and Helping Your Child Who Doesn’t Fit In, which she coauthored with Eileen Costello, M.D. She is also the author of two books about medical training, A Not Entirely Benign Procedure: Four Years as a Medical Student, and Baby Doctor: A Pediatrician’s Training, which were reissued in updated editions in 2010. Her most recent books are Treatment Kind and Fair: Letters to a Young Doctor, and The Mercy Rule, a novel, which appeared in 2008.  For five years, she wrote the monthly “18 and Under” column for the Science Section of the New York Times.

Klass is the National Medical Director of Reach Out and Read, a national program that incorporates books and literacy promotion into pediatric primary care visits, encouraging parent-child interaction through reading aloud.  The program serves over 4.5 million children and families every year through more than 5600 clinical sites. Through her work at the ROR National Center she has trained thousands of medical providers in the ROR strategies of early literacy promotion.  She serves on the Academic Pediatric Association’s Task Force on Child Poverty.