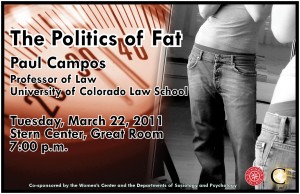 The Politics of Fat

America is in the grip of a moral panic about fat. The “obesity epidemic” is the “reefer madness” of our time, and the sooner we recognize this fact the sooner we will stop demonizing body diversity.

The event is co-sponsored by the Women’s Center and the Departments of Sociology and Psychology.

Topical Background (provided by the speaker)
A wide range of cultural authorities, that includes such disparate figures as First Lady Michelle Obama, leading public health officials, and the National Football League, are assuring Americans that we are in the midst of an “obesity epidemic,” that presents a major public health crisis, which requires a strong response from both the government and the private sector. In fact these claims are symptoms of a classic moral panic. Moral panics occur when social anxieties focus on a marginalized group, that is blamed for causing a serious social problem. Such panics feature responses that are disproportionate to the actual threat posed by the group (which indeed, as in the case of fat, may well be largely or completely imaginary). Professor Campos’ talk will explore the politics of fat: the ways in which an aesthetic preference for thinness has been transformed first into a medical problem and then into a medical-moral crisis. He will explain why the current war on fat is based on a combination of bad science and deep cultural prejudice, and how the weapons being deployed in that war are doing far more harm than good. He will argue for the concept of body liberation: the idea that a more inclusive idea of what constitutes a healthy and desirable body would do far more good than efforts to make Americans slimmer.

Biography (provided by the speaker)
Paul Campos is a professor of law at the University of Colorado. He is the author of The Obesity Myth: Why America’s Obsession With Weight is Hazardous to Your Health (Gotham Books, 2004). Professor Campos has published extensively on the current debate regarding the extent to which weight management should be a subject of public health intermediation. His work on this subject has been featured in, among other publications, Scientific American, New Scientist, the New York Times, the New Republic, and the Los Angeles Times.