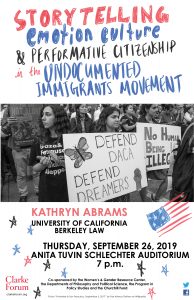 How have a group of immigrants who lack formal legal status, and have been targeted by anti-immigrant enforcement in their state, developed the sense of authorization necessary to become outspoken and effective activists? This lecture, which draws on four years of observation and interviews with undocumented activists in Phoenix, Arizona, will explore three practices that have helped to form this new social movement. 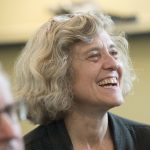 Kathryn Abrams is Herma Hill Kay Distinguished Professor of Law at UC-Berkeley School of Law, where she teaches Constitutional Law, Feminist Legal Theory, and Law and Social Movements. Her early scholarship on constitutional and statutory civil rights – including the Voting Rights Act and Title VII of the Civil Rights Act – led to a career-long interest in social movements that aim to secure greater equality under law. Her work on feminist legal theory analyzed the use of experiential narratives, and the character of women’s agency under circumstances of constraint. More recently she has become interested in the role of emotion in adjudication, rights claiming, and social movement mobilization. These interests have fueled her current project, a book on the mobilization of undocumented immigrants in Arizona, tentatively titled Open Hand, Closed Fist: Undocumented Immigrants Organize in the Valley of the Sun.