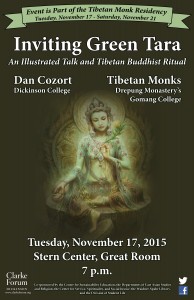 A Program that is Part of the Tibetan Monk Residency,
Enlightened Activity: The Green Tara Initiative

Mandala making is part of a distinctive religious practice called tantra or vajrayana. The practitioner of the Tara tantra chants a liturgy that describes Tara and the cosmos, symbolized by the mandala, but in three dimensions. As he chants, he visualizes the three dimensional mandala and visualizes Tara within it; then he suddenly becomes Tara and visualizes doing feats of vast generosity and healing. The chanting is done in an unusual and distinctive manner; the monks employ a tone so low that it generates overtones, so that each monk is singing a chord. They also use bells, drums, and sometimes a kind of oboe. Before the puja begins, Prof. Cozort will give a short illustrated talk about Tara, the mandala, and the puja, making the connection between what the monks are doing and Buddhist insights into greed, delusion, and ill-will as the roots of environmental degradation and consumerism.

This residency is sponsored by the Clarke Forum for Contemporary Issues and co-sponsored by a Center for Sustainability Education Grant, the Departments of East Asian Studies and Religion,  Center for Service, Spirituality, and Social Justice,  Waidner-Spahr Library, Division of Student Life and the Luce grant for Asian studies and the environment. 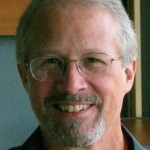 Dan Cozort is associate professor in the Department of Religion at Dickinson College in Carlisle, Pennsylvania, where he teaches comparative religion, specializing in the religions of India, Tibet and Native America. A native of North Dakota, he earned degrees from Brown University and the University of Virginia. He has written two books on Buddhist tantra, a catalogue for an exhibition on tantric art, a video documentary on sand mandalas, a book on the schools of Indian Buddhism, another specifically on the Prasangika Madhyamika School, and several articles and book chapters on topics such as anger, suffering, Western Buddhist teachers, Buddhist ethics, and Tibetan Buddhism in America. He is the editor of the Journal of Buddhist Ethics and the Oxford Handbook of Buddhist Ethics. Before coming to Dickinson, he taught at the University of Virginia, James Madison University, and Bates College. He was one of the founders of the South India Term Abroad (SITA) study program, a collaborative effort of several small liberal arts colleges, and served as its director in Madurai, south India. In 2003‑2005 he directed Dickinson’s program in humanities at the University of East Anglia in Norwich, England.