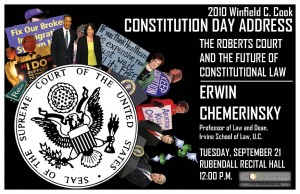 Dean and Professor of Law, University of California, Irvine School of Law

The Roberts Court and the Future of Constitutional Law

The Roberts Court will address the most contested and divisive issues polarizing American society, including gay marriage, state immigration reform, and the new federal health care legislation. What direction will the Court take on these and other important issues? 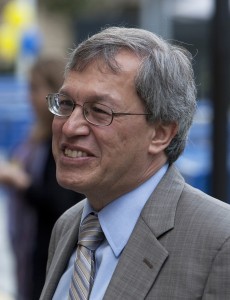 <
Dean and Distinguished Professor of Law, University of California, Irvine, School of Law. Prior to assuming this position in July 2008, was the Alston & Bird Professor of Law and Political Science, Duke University. Joined the Duke faculty in July 2004 after 21 years at the University of Southern California Law School, where he was the Sydney M. Irmas Professor of Public Interest Law, Legal Ethics, and Political Science. Before that he was a professor at DePaul College of Law from 1980-83. Practiced law as a trial attorney, United States Department of Justice, and at Dobrovir, Oakes & Gebhardt in Washington, D.C. Received a B.S. from Northwestern University and a J.D. from Harvard Law School.

Author of six books and over 100 law review articles that have appeared in journals such as the Harvard Law Review, Michigan Law Review, University of Pennsylvania Law Review, Stanford Law Review and Yale Law Journal. Writes a regular column on the Supreme Court for California Lawyer, Los Angeles Daily Journal, and Trial Magazine, and is a frequent contributor to newspapers and other magazines. Regularly serves as a commentator on legal issues for national and local media.

In April 2005, was named by Legal Affairs as one of the top 20 legal thinkers in America. Named by the Daily Journal in 2008 and 2009 (and many prior years) as one of the 100 most influential lawyers in California. In 2006, received the Duke University Scholar-Teacher of the Year Award. Has received many awards from educational, public interest, and civic organizations.

Elected by the voters in April 1997 to serve a two year term as a member of the Elected Los Angeles Charter Reform Commission. Served as Chair of the Commission which proposed a new Charter for the City which was adopted by the voters in June 1999. Also served as a member of the Governor’s Task Force on Diversity in 1999-2000. In September 2000, released a report on the Los Angeles Police Department and the Rampart Scandal, which was prepared at the request of the Los Angeles Police Protective League. Served as Chair of the Mayor’s Blue Ribbon Commission on City Contracting, which issued its report in February 2005.

Winfield Cook Constitution Day Address
The annual address is endowed through the generosity of Winfield C. Cook, former Dickinson Trustee. Each year the Clarke Forum invites a prominent public figure to campus to speak on a contemporary issue related to the Constitution. The event celebrates the signing of the United States Constitution and commemorates Dickinson’s connection to that document, through John Dickinson’s participation as an original signer. Previous speakers have included Kenneth Starr, Ira Glasser, Lowell Weicker, Marjorie Rendell and Tom Ridge.