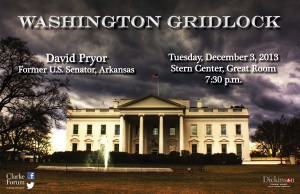 Many public commentators are of the opinion that the election of President Obama in 2008 ushered in a new era of extreme partisanship. Senator Pryor will discuss and evaluate the state of politics in our nation’s capital.

The Clarke Forum for Contemporary Issues sponsored and planned this event in partnership with the Student Senate Public Affairs Committee.

Since retiring from the Senate, he became a Fulbright Distinguished Fellow of Law and Public Affairs, a lecturer in public policy at the Blair Center of the University of Arkansas in Fayetteville and a Distinguished Visiting Lecturer in Politics at Lyon College. Pryor was a fellow and subsequent director at the Institute of Politics at Harvard University’s John F. Kennedy School of Government.  He has served on the board of Winrock International and board of directors of the First Commercial Corporation.  In 1999 he volunteered with the International Rescue Committee and assisted in refugee camps in Albania for a three-week period during the Kosovo war.

He is presently a managing director of Herrington, Incorporated, an investment firm in Little Rock in addition to serving as a consultant to the Federal Express Corporation.  He served as an at-large director of the board of Heifer Project International, Inc. Pryor is also a member of the board of the Corporation for Public Broadcasting in Washington D.C.  David Pryor was appointed by Governor Mike Beebe to the board of trustees for the University of Arkansas System, and he is currently serving a ten-year term.

In September 2008, his autobiography A Pryor Commitment was published.  The book chronicles his four decades of dedication to politics, government and public service.
David and his wife Barbara are founders of the Barbara and David Pryor Center for Oral and Visual History at the University of Arkansas.