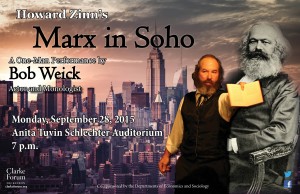 Karl Marx launches into a passionate, funny and moving defense of his life and political ideas in Howard Zinn’s brilliant and timely play, Marx in Soho.

Bob Weick, is the national touring actor of Howard Zinn’s, Marx in Soho. The celebrated actor and Barrymore Award nominee has presented over 250 performances of Zinn’s play from Maine to California. A farrier by trade, Bob began his acting career in 1995 and in the aftermath of the 2000 election, 9/11, and the 2003 invasion of Iraq, chose to use his talent to contribute to the education and engagement of students and citizens.

Video of Performance for Campus-Viewing Only