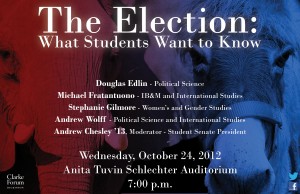 A panel of Dickinson professors will discuss the important policy positions of each of the presidential candidates. The presentations will be nonpartisan and objective in nature. Topics include health care and insurance, the federal budget and the national economy, women’s rights issues, and foreign policy and national security.

The event is sponsored by The Clarke Forum for Contemporary Issues.

Douglas E. Edlin received his Ph.D. from Oxford University.  He also holds a J.D. from Cornell, an M.A. from the University of Pennsylvania, and a B.A. from Hobart College.  His research and teaching interests are in comparative constitutionalism, the judicial process and judicial review, the legal and policy issues raised by developments in assisted reproductive technology, and the politics of race and gender in the United States.  Along with a number of articles in leading journals, his authored book, Judges and Unjust Laws, was published by the University of Michigan Press, and his edited book, Common Law Theory, was published by Cambridge University Press.  Before returning to graduate school, he argued cases in federal district courts in Pennsylvania, New York and New Jersey, in the United States Court of Appeals for the Second Circuit, and in New Jersey state trial and appellate courts.

Michael J. Fratantuono received his Ph.D. in international economics from the University of Washington in 1988 and in that same year joined the Dickinson Economics Department.   From July 1995 to June 1997, he took leave from Dickinson and held the position of Visiting Professor, Department of National Security and Strategy, United States Army War College.  He is currently a member of the International Business and Management Department and the International Studies Department.  His teaching and research interests include: the changing structure of the global economic and political system; the rising interdependence among state and non-state actors in the global system; and the strategies being pursued by nation states, corporations, non-governmental organizations, and other actors.   In the past few years, he has explored the intersection of globalization, sustainability, and national security related matters.  In 1997, he was awarded the Department of the Army Medal for Outstanding Civilian Service.  In May 2005, he was named, based on a vote of the College’s faculty, co-recipient of Dickinson’s Distinguished Teaching Award.  In May 2006, based on a vote of the graduating class, he was named winner of the Constance and Rose Ganoe Memorial Award for Inspirational Teaching.

Stephanie Gilmore received her B.A. from the University of Alabama, M.A., from the University of Memphis, and her Ph.D. from Ohio State University. Her research analyzes the nuances of grassroots feminist activism in the 1970s and early 1980s across the United States. Her first book, Feminist Coalitions, is an edited collection of historical essays that examine the rich and diverse coalitions feminists formed in postwar America. Her latest book, Groundswell: Grassroots Feminist Activism in Postwar America, was published in September 2012. She has started a new project on the 1968 Miss America protest.

Andrew Wolff received his B.A. from Washington & Lee University and his M.A. and Ph.D. from Johns Hopkins University. His areas of teaching and research include U.S. foreign policy, transatlantic relations, NATO security policy, international relations theory, and European politics. Currently, his primary research concerns the geopolitics of NATO enlargement into Central and Eastern Europe. He has been a legal staff assistant in the United States Senate and an English teacher in the Czech Republic. Professor Wolff’s article “The Structural and Political Crisis of NATO Transformation” was published in the Journal of Transatlantic Studies in December 2009.