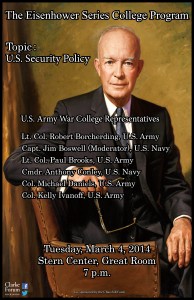 The Eisenhower program is an academic outreach designed to encourage dialogue on national security and other public policy issues between students at the U.S. Army War College and students/faculty at other academic institutions.

Captain Jim Boswell (facilitator of the event) was born at Patrick Air Force Base, Florida and grew up on Air Force bases in Europe and the Far East.  He attended high school and college in the great state of Florida and holds a bachelor’s of science in industrial and systems engineering from the University of Florida and a master’s of science in Computer Science from the Naval Postgraduate School, Monterey California.  He is also a graduate of the United States Army War College with a Master of Strategic Studies degree.

Designated a naval flight officer, he has flown over 2500 hours in the A-6E Intruder medium attack aircraft and the EP-3 Aries reconnaissance aircraft in squadrons deployed around the world. He commanded Tactical Air Control Squadron Twenty-Two (TACRON-22) at Little Creek, Virginia, leading the Skylords of TACRON-22 during two successful CENTCOM deployments.

He served as the Pacific Fleet Branch Head for Deep Blue on the staff of the Chief of Naval Operations (CNO). He also deployed in support of Commander Joint Special Operations Task Force – Horn of Africa, to Djibouti, Africa as Intelligence, Surveillance, and Reconnaissance analyst/advisor.  Before being posted to the Army War College he was the Deputy Division Chief (J-88) at United States Strategic Command at Offutt Air Force Base, Nebraska, supporting capability requirements for information warfare, electronic warfare and cyberspace.

Lieutenant Colonel Robert Borcherding grew up in Chino Hills, California. In 1993 he graduated from the United States Military Academy at West Point, New York, with a B.S. in Political Science (International Relations). Lt. Col. Borcherding was commissioned as a second lieutenant in the Corps of Engineers. After three years at Fort Bragg, North Carolina, he attended The University of Virginia School of Law under the Funded Legal Education Program, where he obtained his J.D. in 1999. Lt. Col. Borcherding also holds a M.A. in Foreign Affairs from The University of Virginia Graduate School of Arts and Sciences.

Lt. Col. Borcherding’s first duty assignment as a Judge Advocate was in Kaiserslautern, Germany, with the 21st Theater Support Command, where he served in a variety of positions – Chief of Legal Assistance, Trial Counsel, Senior Trial Counsel, Chief of Military Justice, and Administrative Law Attorney. Following the Judge Advocate Graduate Course, LTC Borcherding was assigned as the Group Judge Advocate, 10th Special Forces Group (Airborne), at Fort Carson, Colorado. After a year of school at Fort Leavenworth, Kansas, he served as the Deputy Director, Combat Developments Directorate, at The Judge Advocate General’s Legal Center and School (TJAGLCS). He then served as the Deputy Staff Judge Advocate, 1st Infantry Division and Fort Riley, Kansas, and as the Staff Judge Advocate, Fort Riley, Kansas, during the 1st Infantry Division’s deployment to Iraq. Most recently, he served as Deputy Chief, Operational Law Division, at U.S. Africa Command in Stuttgart, Germany.

His deployment experience as a judge advocate includes a tour as an assistant legal advisor to Headquarters, Kosovo Force (Main), in Pristina, Kosovo, and three tours as the staff judge advocate for the Combined Joint Special Operations Task Force – Arabian Peninsula in Iraq.

Lt. Col. Borcherding is married to the former Anne L. Pettijohn and has three daughters – Katherine, Elizabeth, and Meredith.

Lieutenant Colonel Paul “Tim” Brooks was born and raised in Syracuse, New York. He received his bachelor’s of arts from the University of Notre Dame in May 1990. In March 2004, he earned a master’s of science degree in information operations from the Naval Post Graduate School in Monterey, California.

Lt. Col. Brooks transitioned to the Military Intelligence Corps in 1994 and was to Fort Campbell, KY where he served in a variety of intelligence positions including battalion and brigade intelligence officer as well as direct support military intelligence company commander in the 101st Airborne Division (Air Assault).  During this tour he deployed to Haiti with the 1st Brigade in 1996 to support of the UN Mission in Haiti.  After command Lt. ColonelBrooks was reassigned to the Battle Command Training Program in Fort Leavenworth, KS, as an intelligence, and later Information Operations (IO), Observer-Trainer where he has the opportunity to work with Army National Guard units throughout the U.S. to develop their staff skills and procedures.

Following his promotion and selection as an IO officer, he was reassigned to Camp Red Cloud, Korea, as the 2nd Infantry Division’s IO officer for 15 months.  Upon returning from Korea, Lt. Col. Brooks was assigned to the 1st Cavalry Division in Ft Hood, TX where he served as the IO officer for the 3rd “Greywolf” Brigade, the secretary to the general staff and the division IO officer.  While assigned to the division he deployed to Iraq twice from 2006 to 2008 and later from 2009 to 2010.  During these deployments he was responsible for coordinating Psychological Operations, Key Leader Engagement, Operations Security, Electronic Warfare and the coordination of these programs with Civil Affairs and Public Affairs activities.

In July 2013 Lt. Col. Brooks completed a three year tour as the IO plans and policy lead for the Operations Division, of the NATO International Military Staff.  In this role he served as the secretary for a variety of committees and working groups tasked with developing Alliance policy and doctrine.

Lt. Col. Brooks is married to the former Ms. Kimberly Lawrence of New Orleans, Louisiana. They have one daughter, Darby, who is 12 years old.

In April 1996, he was direct commissioned as a reserve ensign in the Civil Engineer Corps.  After commissioning, he reported to Naval Mobile Construction Battalion TWENTY THREE and then to NMCB TWENTY ONE for 3 years.  He was voluntarily recalled to active duty in May 2000 and reported to the Civil Engineer Officers School in Port Hueneme, California, which he completed in July 2000 as the “Honor Graduate”.

In his first active tour as a LT, he served as the deputy resident officer in Charge of Construction at Southern Division, Naval Facilities Engineering Command, ROICC Office Panama City, Florida till June 2002.  He then rotated to NMCB ONE, where he served as the Alfa Company Commander, the Seabee Engineer Reconnaissance Team OIC, Deployment for Training (DFT) Grenada OIC, and DFT Balikatan (Philippines) OIC.  He detached from NMCB ONE in June 2004 to become the Assistant Public Works Officer for Naval Station Guantanamo Bay.  During his tenure at Guantanamo Bay, he was promoted to lieutenant commander (LCDR) and subsequently detailed as the table of allowance readiness officer (R43) for the Twenty Second Naval Construction Regiment located in Gulfport, Mississippi.  His tour at 22nd NCR lasted two years, including eight months in Kuwait as part of 22nd NCR Forward, before being detailed to Navy Installations Command as the utilities and energy program manager for one year, then assigned as the public works branch head within CNIC for his last year.  Prior to his return to Guantanamo Bay, he was the military aide for assistant secretary of the navy (Energy, Installations and Environment) and promoted to Commander.  Cpmmander Conley is a registered professional engineer in the state of Maryland, a certified energy manager, and a member of the Society of American Military Engineers.  He is a member of the Acquisition Professional Community and DAWIA Level III certified. His awards include a Meritorious Service Medal (three), Navy and Marine Corps Commendation Medal (three) and Navy and Marine Corps Achievement Medal.  He is qualified as a Seabee Combat Warfare Officer.

Commander Conley is married to the former Ms. Jennifer Tanner of Bush, Louisiana.  They have two sons, Lance Anthony Conley, who is 8 years old and Tanner Andrew Conley, who is 3 years old.

Colonel Michael Daniels was born in Proctor, Vermont. He received a bachelor of arts in political science from St. Michael’s College (Winooski, VT) in 1983. He earned a master’s in military arts and science in military history from the U.S. Army Command and General Staff College in 2003, and a master of science in international relations from Troy University in 2005.

Prior to attending the U.S. Army War College, he was the enlisted engineer branch chief at the U.S. Army Human Resource Command, Fort Knox, KY. Prior to that assignment he was the garrison commander at the Yakima (WA) Training Center. Before command he was professor of military science and Army ROTC department chair at Oregon State University. Colonel Daniels has had a variety of tactical Army assignments as an engineer throughout the United States and around the world, to include Iraq, Kuwait, Afghanistan, South Korea, Germany and England. He was an enlisted infantryman for six years prior to graduation from Army Officer Candidate School and commissioning as a second lieutenant in 1991.

Colonel Daniels has received a number of awards and decorations throughout his 29-year Army career, and is a graduate of various military schools. He is a member of the Society of Military Engineers, the Army Engineer Association, Rotary, Elks, and a number of veteran’s service organizations.

Colonel Daniels is married to the former Emily McDaniel from Tacoma, WA. They have two children, Benjamin aged 22, an Army infantry corporal in the 10th Mountain Division and currently serving in Afghanistan, and Katherine aged 20, a sophomore at Central Washington University.

Colonel Kelly Ivanoff grew up in Cody, Wyoming.  He received his bachelor’s of science in biology from Black Hills State University in Spearfish, South Dakota in May 1991.  In June 2003, he completed his master’s of science in human resources administration from Central Michigan University.

Commissioned a second lieutenant in the Field Artillery, Col. Ivanoff began his professional career in 1992 as a Multiple Launch Rocket System (MLRS) Platoon Leader in Bamberg, Germany.  Following completion of the Field Artillery Officer Advanced Course in 1995 he was assigned to the 10th Mountain Division at Fort Drum, New York and served in a variety of assignments including command of Bravo Battery, 3rd Battalion, 6th Field Artillery, and Headquarters Battery, 10th Mountain Division Artillery.  After completion of the Army’s Command and General Staff College, he was assigned to the 82nd Airborne Division, Fort Bragg, North Carolina and immediately deployed to Ar Ramadi, Iraq where he served for eight months.  In 2005, he deployed to Louisiana to conduct humanitarian support operations after Hurricanes Katrina and Rita made landfall.  In 2007 and 2008 he served a 15 month deployment in Khowst, Afghanistan.  From 2009-2011, Colonel Ivanoff served as the Commander of the 1st Battalion, 19th Field Artillery at Fort Sill Oklahoma, and he completed his assignment at Fort Sill by serving as the Director of the Field Artillery Personnel Proponent Office.

Col. Ivanoff is married to the former Ms. Tamra Fontaine of Cody, Wyoming.  They have five children, Elizabeth, Samantha, Casey, Curtis and Ashley.