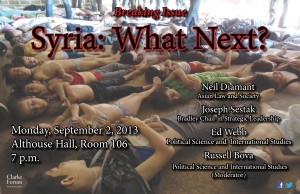 A panel discussion focused on the issues arising out of the Syrian civil war, in particular the recent apparent use of chemical weapons by the Assad regime and the likelihood of a military response by the United States.  The situation highlights a number of perplexing issues regarding how the conflict affects other countries in the Middle East, the outcomes of the Arab uprisings, the substance and binding character of international law, along with a number of domestic U.S. constitutional and political issues.

Neil J. Diamant is professor of Asian law and society at Dickinson College. He has a Ph.D. in political science from the University of California, Berkeley, and teaches classes on Israeli politics and the history of Zionism in addition to those in his primary field of expertise.  He lived in Israel between 1978-1988, and 1997-2000, serving in the Israeli Defense Forces (1982-1985), completing his B.A. at the Hebrew University of Jerusalem and later teaching at Tel Aviv University.

Joseph Sestak, was born and raised in Pennsylvania, Joe Sestak graduated from the U.S. Naval Academy and served 31 years in the U.S. Navy, attaining the rank of 3-star Admiral. He led a series of operational commands at sea, culminating in command of the GEORGE WASHINGTON Aircraft Carrier Battle Group during combat operations in Afghanistan and Iraq. He served as President Clinton’s Director for Defense Policy in the National Security Council; as head of “Deep Blue”, the Navy anti-terrorism unit focused on the “Global War on Terrorism”; and oversaw the Navy’s five year $350 billion warfare budget as Deputy Chief of Naval Operations.  After the Navy, Joe was elected to Congress from Pennsylvania’s 7th Congressional District in 2007, where he served through 2010 when he ran for the U.S. Senate. The highest-ranking former military officer ever elected to Congress, The National Journal identified him as “at the ideological center of the House,” while the House Majority Leader named Joe the “most productive” representative in his class, through his service on the Armed Services Committee, the Education and Labor Committee, and as Vice Chairman of the Small Business Committee. While in the Navy, Joe received a master’s in public administration, and a Ph.D. in political economy and government from Harvard University. Married to Susan, and Dad to Alex, he resides in Edgmont, Pennsylvania.

Ed Webb served with Britain’s Diplomatic Service 1992-2000, much of that time in Cairo, before completing a Ph.D. at the University of Pennsylvania. An assistant professor of political science and international studies, he helped establish Dickinson’s Middle East Studies program and also contributes to the Security Studies certificate. He has published articles and book chapters on authoritarianism, nationalist and religious aspects of education policies in Turkey and Tunisia, censorship in the Arab world, and Doctor Who. He is active in international debates about digital technologies in education as well as Middle East politics: you can follow him on Twitter via @edwebb.

Russell Bova is professor of political science and international studies at Dickinson College. He has published many articles on Russian politics and comparative democratization in scholarly journals such as World Politics and Journal of Democracy. He is also the author of How the World Works (Pearson 2012).

Podcast from the Panel Discussion