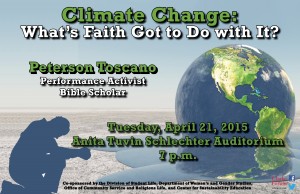 Climate Change: What’s Faith Got to Do with It?

People are searching for new ways of looking at climate change. Peterson Toscano provides a lively, insightful, and hilarious presentation that helps his audiences wrap their heads and hearts around global warming.

Tonight is the first night of two performances. The second performance, Peterson Unplugged, is scheduled for Wednesday, April 22 at 7 p.m.

This event is sponsored by the Clarke Forum for Contemporary Issues and co-sponsored by the Division of Student Life, Department of Women’s and Gender Studies, Office of Community Service and Religious Life, and Center for Sustainability Education. 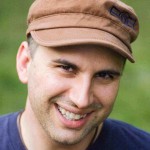 Peterson Toscano is a theatrical performance activist using comedy and storytelling to address social justice concerns. He spent 17 years and over $30,000 on three continents attempting (and failing) to change his same-sex orientation. He is the author of one-person comedies including, Queer 101–Now I Know My gAy,B,C’s, Jesus Had Two Daddies, and Doin’ Time in the Homo No Mo Halfway House, which chronicles his two years in “gay rehab” in Memphis, TN. With his play, Transfigurations–Transgressing Gender in the Bible, Peterson has delighted diverse audiences and received high praise for his ground-breaking, genre-bending, gender blending Bible scholarship wrapped up in a performance. He is the host of the Climate Stew Show. His newest play, Does This Apocalypse Make Me Look Fat? is a comedy about broken things and provides an LGBTQ response to climate change.