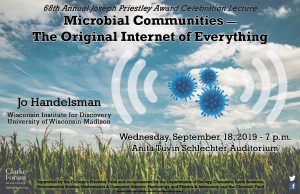 Wisconsin Institute for Discovery at the University of Wisconsin-Madison

Microbial Communities—The Original Internet of Everything

Microbial communities run the world. Although they are too small to see with the naked eye, microorganisms determine the health of humans, our food supply, and the environment. They accomplish their amazing feats working in concert in communities, but there is little knowledge about what makes these communities robust and stable. A book sale and signing will follow the presentation.

The Joseph Priestley Award recipient is chosen by a different science department each year. The Department of Biology has selected this year’s recipient. The event is supported by the College’s Priestley Fund and is sponsored by the Clarke Forum for Contemporary Issues and co-sponsored by the departments of biology, chemistry, earth sciences, environmental studies, mathematics & computer science, psychology, and physics & astronomy and the Churchill Fund.  It is part of the Clarke Forum’s Leadership in an Age of Uncertainty Series. 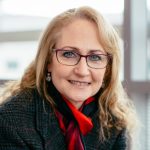 Jo Handelsman is the director of the Wisconsin Institute for Discovery at the University of Wisconsin-Madison, a Vilas Research Professor, and Howard Hughes Medical Institute Professor. She previously served as a science advisor to President Barack Obama as the associate director for science at the White House Office of Science and Technology Policy (OSTP) where she served for three years until January 2017, and was on the faculty at the University of Wisconsin and Yale University before that. She received her Ph.D. at the University of Wisconsin-Madison in molecular biology and has since authored over 200 scientific research publications, 30 editorials, and 29 essays. She has authored numerous articles about classroom methods and mentoring and she is co-author of six books about teaching – Entering Mentoring and Scientific Teaching. She is responsible for groundbreaking studies in microbial communication and work in the field of metagenomics. She is also widely recognized for her contributions to science education and diversity in science. Notably, she received the Presidential Award for Excellence in Science, Mathematics, and Engineering Mentoring from President Obama in 2011, and in 2012, Nature named her one of “ten people who mattered this year” for her research on gender bias in science.