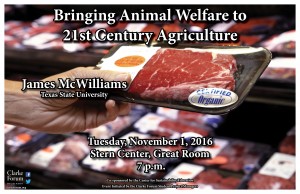 McWilliams will explore the many ways in which alternatives to industrial animal agriculture–pastured, cage-free, and grass fed systems, for example–do not live up to their promised welfare reforms, before outlining a future agricultural system that can more effectively attend to animal welfare concerns.

James McWilliams is an historian and writer based in Austin, Texas. His books include The Modern Savage: Our Unthinking Decision to Eat Animals (Thomas Dunne Books), Just Food: Where Locavores Get It Wrong and How We Can Truly Eat Responsibly (Little, Brown) and A Revolution in Eating: How the Quest for Food Shaped America (Columbia University Press). His writing has appeared in The Paris Review daily, The New Yorker.com, The New York Times, Harper’s, The Washington Post, Slate, The American Scholar, Texas Monthly, and The Atlantic. He writes “The Things We Eat” column at Pacific Standard, where he is a contributing writer. His literary non-fiction has appeared in The Millions, Quarterly Conversation, The New York Times Book Review, and The Hedgehog Review.

Video of Presentation for Campus Viewing Only