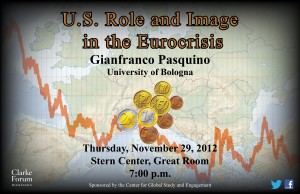 U.S. Role & Image in the Eurocrisis

Pasquino will explore the nature and extent of the Eurocrisis and, from a European perspective, address the issue whether the U.S. has any useful role to play in resolving it.

This event is sponsored by The Clarke Forum for Contemporary Issues and the Center for Global Study and Engagement. 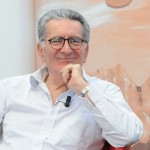 From 1983 to 1992 and from 1994 to 1996 he served as Senator of the Italian Republic.
He has received three degrees honoris causa from the University of Buenos Aires, the University of La Plata and, most recently, July 2011, the Catholic University of Cordoba. In 2005 he was elected to the Accademia Nazionale dei Lincei. From 2010 to 2013 he will be President of the Società Italiana di Scienza Politica (SISP).