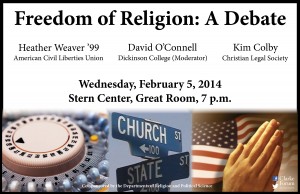 Colby and Weaver will debate the issues of two freedom-of-religion cases that are currently before the Supreme Court: Greece v. Galloway, which concerns the constitutionality of starting a town council meeting with a prayer; and Sebelius v. Hobby Lobby, which addresses whether the Affordable Care Act can require a family-owned business to provide insurance coverage for contraceptives despite the religious objections of the owners.

Kim Colby has worked for Christian Legal Society’s Center for Law and Religious Freedom since graduating from Harvard Law School in 1981. She has represented religious groups in several appellate cases, including two cases heard by the United States Supreme Court. She assisted in congressional passage of the Equal Access Act, 20 U.S.C. § 4071, et seq., which protects the right of public secondary school students to meet for prayer and Bible study on campus. Ms. Colby has prepared several publications regarding religious expression in public schools.

Ms. Colby graduated with a B.A. in history from the University of Illinois where she earned Phi Beta Kappa. Her personal focus was on slavery in colonial North America.

Heather L. Weaver ’99 is a senior staff attorney with the ACLU Program on Freedom of Religion and Belief. She litigates a wide range of religious-liberty cases nationwide.  Ms. Weaver is a graduate of Dickinson College (’99) and received her J.D. from the University of California, Berkeley (Boalt Hall). Prior to joining the ACLU, Ms. Weaver was an attorney at Americans United for Separation of Church and State, where she litigated cases involving a variety of church-state issues.

in 2012. He also holds an M.A. and M.Phil. from Columbia, as well as a B.A. in political science and economics from the University of Pennsylvania. His research interests include the presidency, religion and politics, and American political development. O’Connell’s research on presidential campaign decision-making has been published in Presidential Studies Quarterly. His current book project, God Wills It: Presidents and the Political Use of Religion, is a comprehensive study of presidential religious rhetoric – when it has been used, how it has been used, and when it has, or more often has not, been successful. An enthusiastic teacher, David was a finalist multiple times for teaching awards at Columbia. He spent the 2012-13 academic year teaching at Bard College.