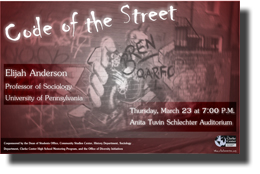 Issue in Context
In an attempt to explain why many urban youths are prone to commit acts of violence and aggression, Dr. Anderson has identified a common set of street mores, termed the â€œcode of the street.â€ Often termed â€œstreet justice,â€ the code allows individuals to command respect in society and alleviates the problems of inner city violence by relying on a strategy of deterrence. Often, the threat of implied violence is used to avoid the use of actual violence

The code reaches beyond the limits of the law, and helps residents gain a sense of security and belonging. The concept of â€œstreet justiceâ€ provides an alternative method for afflicted inner-city areas to manage their own problems in the face of an increasingly ineffectual police force.

About the Speaker
Elijah Anderson is the Charles and William L. Day Distinguished Professor of the Social Sciences and a professor of sociology at the University of Pennsylvania. He is the director for the Philadelphia Ethnography Project, associate editor of Qualitative Sociology, and a member of the board of directors of the American Academy of Political and Social Science.

Anderson received the Eastern Sociological Association’s Komarovsky Award for his book Code of the Street: Decency, Violence, and the Moral Life of the Inner City. He is also the author of Streetwise: Race, Class, and Change in an Urban Community; and Racial Tensions, Cultural Conflicts, and Problems of Employment Training.

As a Ford Foundation Fellow, Anderson received his doctorate from Northwestern University. He has also