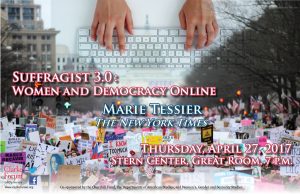 As civic conversations move increasingly online, women’s voices are outnumbered by men’s voices by large margins. New York Times comment curator Marie Tessier addresses the dearth of women’s voices in comment sections, outlines the causes for it, and offers a call to action to bring women’s voices to equality in the 21st Century. 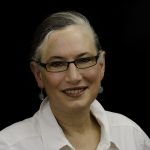 Marie Tessier leads the team moderating comments to the Opinion pages of NYTimes.com and contributes to opinion blogs. Tessier has worked at The New York Times since 2007, when the company first rolled out its moderation system. Before joining the Times, Tessier was a regular contributor to the Women’s eNews and Women’s Media Center news sites, specializing in violence against women. She was an adjunct professor of journalism for twenty years, and has been on staff at The Washington Post, National Public Radio, the Tampa Bay Times and has been a television commentator, a weekly columnist, and a contributor to “Marketplace” radio. Her work has appeared in Ms. Magazine, the Columbia Journalism Review, the Chicago Tribune, the San Francisco Chronicle and dozens of other news sites. She is the author of “Investigating Aviation: A Reporter’s Guide” from Investigative Reporters & Editors, and has written chapters in journalism textbooks. Before journalism, she worked at the League of Women Voters of the United States, and served on team producing presidential debates.